From the Fall of the Berlin Wall to German Reunification 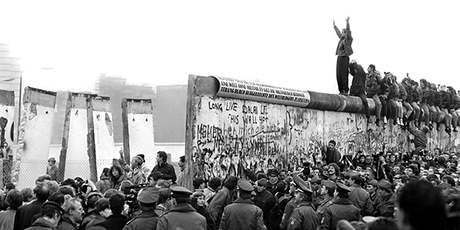 The fall of the Berlin Wall in November 1989 paved the way for the reunification less than a year later of Germany, split into East and West for 45 years.

Here is a timeline.

East Germany's communist authorities unexpectedly open all checkpoints on the Berlin Wall on November 9, 1989 and allow free passage to the democratic West for the first time since the barrier went up in 1961.

Over the weekend three million East Germans cross over to rediscover the West.

On November 13 reformer Hans Modrow is appointed to lead a new government, one-third of which is non-communist.

He and Modrow attend ceremonies on December 21-22 for the reopening of Berlin's Brandenburg Gate, which had been closed during Germany's division.

Thousands flood through the gate, some waving flags of a united Germany.

On January 30, 1990 Soviet leader Mikhail Gorbachev accepts in principle the reunification of East Germany with the West.

On February 13 the Allies launch "2+4" talks with the East and West on the security implications of a return of a unified Germany -- once considered an aggressor.

Kohl calls on Modrow to agree to economic and monetary union, which would effectively end East German sovereignty, and they start talks.

East and West Germany sign a treaty on May 18 agreeing to economic, monetary and social union. On July 1 the East adopts the West German deutschmark as its currency.

Security controls on the inter-German border come to an end.

On July 6 the two German states enter negotiations on the conditions of full reunification.

On July 22 the East German parliament adapts to the federal structure in place in West Germany.

On August 23 all sides set October 3 as the date for official reunification.

At the stroke of midnight that day a giant German flag is raised outside the parliament building in Berlin, the Reichstag, where tens of thousands of people celebrate official reunification in a mood of euphoria.

Kohl becomes the first chancellor of the new Germany at legislative elections in December.