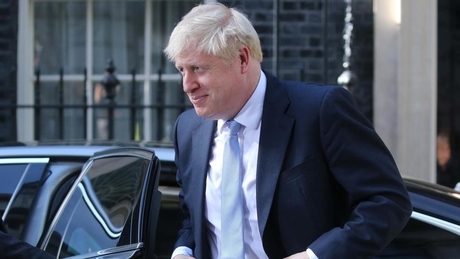 British Prime Minister Boris Johnson accused Tehran of being behind attacks on Saudi oil installations, in remarks to reporters en route to New York where he will meet with Iran's president.

"I can tell you that the UK is attributing responsibility with a very high degree of probability to Iran for the Aramco attacks," he said, cited by Britain's Press Association news agency on Monday.

He is due to meet with President Hassan Rouhani at the UN General Assembly in New York.

He will also discuss the attacks at a joint meeting with French President Emmanuel Macron and German Chancellor Angela Merkel.

"We think it very likely indeed that Iran was indeed responsible for using both UAVs (unmanned aerial vehicles), both drones and cruise missiles," Johnson told reporters.

"Clearly the difficulty is, how do we organise a global response? What is the way forward?

"And we will be working with our American friends and our European friends to construct a response that tries to de-escalate tensions in the Gulf region."

The United States has accused Tehran of carrying out air attacks on Saudi Arabia's Abqaiq plant and the Khurais oil field on September 14, knocking out half the kingdom's oil production.

Iran denies responsibility for the  attacks which were claimed by Iranian-back Huthi rebels in Yemen.

Johnson said: "Clearly if we are asked either by the Saudis or the Americans to have a role then we would consider in what way we could be useful."

The British premier also said he would raise the case of Nazanin Zaghari-Ratcliffe, a British-Iranian mother held in Tehran since 2016, when he meets with Rouhani.

Johnson has been accused of making her plight worse when, in a previous job as foreign minister, he said she had been training journalists in Iran before she was arrested for sedition.

Her family strongly denies this and he swiftly backtracked. Zaghari-Ratcliffe, a project manager with the Thomson Reuters Foundation, the media group's philanthropic arm, denies all charges.