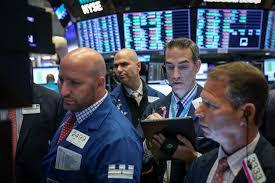 European stock markets tumbled on Wednesday after worse-than-expected U.S. data revived worries about the impact of the trade war on the global economy.

London dived 2.0 percent in midday deals after fall in Asia and overnight on Wall Street, as investors took flight on news of a disappointing reading on factory activity in the United States.

An index of U.S. manufacturing activity fell to the lowest level since June 2009, according to the Institute for Supply Management (ISM), which pointed to trade conflicts as the biggest headwind.

"European equities have turned firmly lower in early trading, on the very reasonable assumption that, if things are that bad for the U.S., then they must be even worse for Europe."

The ISM data pointed to the impact of the China-U.S. trade war on the world's top economy and will likely put pressure on Donald Trump to push through an agreement. Top-level talks are planned for this month.

Adding to the selling pressure in Asia were long-running concerns about the impact of increasingly violent pro-democracy protests in Hong Kong that saw a demonstrator shot and wounded by police on Tuesday.

Hong Kong stocks fell 0.2 percent -- though it pared earlier steep losses -- as investors returned from a public holiday to mark China's National Day but which saw some of the worst violence in the city since protests began in June.

A teenager was shot in the chest by a policeman, fueling fears of a worsening of the unrest that has crippled the city's economy.

Tokyo ended 0.5 percent lower, Sydney fell 1.5 percent and Singapore lost 1.2 percent, with Manila also off more than one percent. Shanghai was closed for a holiday.

Seoul shed almost two percent after North Korea fired a missile into the sea just a day after Pyongyang said it would resume stalled nuclear talks this week.

Dealers are also awaiting the release Friday of U.S jobs data, which could give an idea about the Fed's rate plans, while the corporate earning season is also about to get underway.

The British pound was meanwhile pressured against the dollar as Prime Minister Boris Johnson prepared to submit his final offer for a new Brexit deal to Brussels later in the day.