One Year of Protest in the Middle East 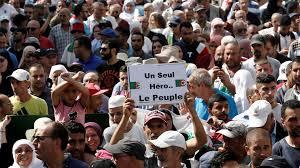 Mass protests have rocked several Arab countries this year in an echo of the 2011 revolts that toppled long-time dictators in countries including Egypt, Libya and Tunisia.

Here is a round-up:

Protests erupt in December 2018 against the government's tripling of bread prices after months of biting economic crisis.

Thousands gather outside the army headquarters in Khartoum on April 6, demanding the resignation of President Omar al-Bashir.

On April 11, the army ends Bashir's 30 years in power and installs a transitional military council.

Demonstrators accuse the military of staging a coup and demand a civilian government.

On June 3, armed men disperse the sit-in at the army headquarters. The crackdown leaves scores dead.

After weeks of negotiations, the protest leaders and military sign on August 17 an accord establishing a governing council dominated by civilians but headed by the military.

The council is tasked with overseeing a transition to civilian rule with democratic elections in 2022.

Clashes during the months-long protest movement claimed the lives of more than 250 people, according to doctors.

On February 22, thousands demonstrate in Algiers and other cities against President Abdelaziz Bouteflika's plans to run for a fifth term.

The ailing 82-year-old had been in power for 20 years and was severely weakened by a stroke in 2013.

On April 2, after the army withdraws its support, Bouteflika cedes to the pressure and resigns.

But protesters demand an overhaul of the entire political establishment, including the resignation of key figures, such as the powerful army chief, Ahmed Gaid Salah.

For months, large groups continue to gather every Friday to demand changes.

Although the opposition rejects elections under the current establishment, the interim president has called a vote for December 12.

On September 20, small protests break out in Cairo and other cities, calling for the removal of President Abdel Fattah al-Sisi, the former army chief who took power in 2014.

The rare demonstrations are quashed quickly, protests having been effectively banned by Sisi's hardline regime.

Security forces round up dozens of people and impose tight control over the square.

Large demonstrations also spring up in several other cities, including Alexandria and Suez.

They follow calls to protest issued in videos posted online by a disgruntled Egyptian businessman exiled in Spain.

Rights groups say more than 2,000 people, including lawyers, activists, professors and journalists, are detained in the ensuing crackdown.

On October 1, mass demonstrations erupt in Baghdad and cities in the south of Iraq against unemployment and poor public services, with protesters demanding the departure of "corrupt" government officials.

The demonstrations explode into violence, with thousands of protesters defying security forces who open fire with live bullets.

In four days, dozens of people are killed and hundreds wounded.