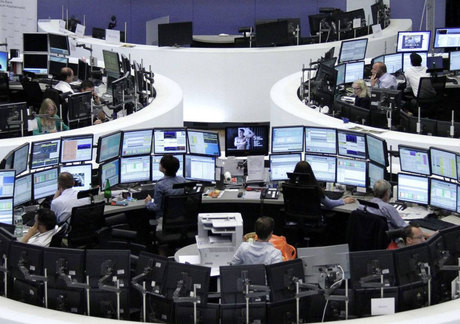 Frankfurt advanced 0.5 percent, while London and Paris each won 0.4 percent in early afternoon deals, despite news that German industrial orders in Germany fell back in August.

The bright performance at the start of the week followed strong gains in Wall Street action on Friday.

"We are in a... scenario where bad news is good news," ThinkMarkets analyst Naeem Aslam told AFP.

"Any weakness in the economic number, which we experienced today, confirms that the European Central Bank is going to remain accommodative and this helps investors to favor riskier assets" like stocks.

Most markets also rose in Asia after a mixed U.S. jobs report eased worries about a recession in the world's top economy -- and maintained expectations the Federal Reserve will press on with more interest rate cuts.

However, there was some nervousness after reports said China had cut back on the number of areas it is willing to discuss at this week's top-level trade talks with the U.S., rekindling concerns about the chances of any agreement between the two.

After a string of below-par data last week that highlighted the impact of Donald Trump's trade war on the key manufacturing and services sectors, Friday's much-anticipated non-farm payrolls figures showed unemployment at a 50-year low in September.

But the pace of job creation was the slowest in four months, wages fell and the manufacturing workforce also shrank for the second time this year.

All three main U.S. indices rallied more than one percent as dealers breathed a sigh of relief that the jobs figures did not miss by a bigger margin.

Focus turns this week to the resumption of high-level trade talks between China and the United States in Washington.

However, while there has been a broad expectation the two sides are coming together in some areas owing to their economies stuttering, reports said Beijing was looking to narrow the remit of any deal.

Bloomberg News reported that top negotiator Vice Premier Liu He said he would not put on the table reforms to Chinese industrial policy or government subsidies, a key source of anger within the White House.

"It was the string of dismal economic numbers that sparked the (oil market) sell-off because traders became concerned about global growth."