Damascus Says Would Welcome Kurds Back into Fold 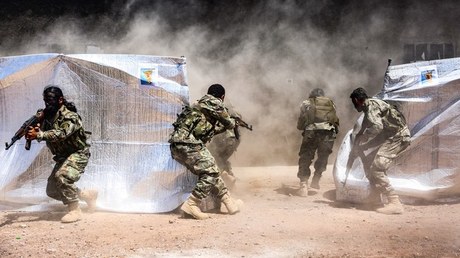 Damascus is ready to welcome Syria's Kurds back into the fold after Washington left them to face Turkish military threats alone, a senior official said in comments published Tuesday.

Ankara has threatened an offensive in Syria against Kurdish militias it considers terrorists and US forces on Monday pulled back from Turkish border areas, opening the way for an invasion President Recep Tayyip Erdogan has said could come at any moment.

"We will defend all Syrian territory, and we will not accept any occupation of Syrian land," Deputy Foreign Minister Faisal Mekdad told the pro-government Al-Watan newspaper.

The official said Kurdish groups have been "tossed aside" by Washington, after US President Donald Trump on Monday gave Turkey a green light to press ahead with its planned military operation.

"The nation welcomes all its children and Damascus will solve all problems in Syria in a positive manner, away from violence," Mekdad said, encouraging Syria's Kurds to reconcile with the regime.

In the early part of the eight-year-old civil war in Syria, the Kurds consolidated control over the northeast and set up their own autonomous institutions.

When the Islamic State group swept across the region in 2014, they mounted a fierce defence of their heartland and became the US-led coalition's main military partner on the ground.

The Kurds want protection from the long-threatened Turkish offensive.

Ankara views Kurdish militias in Syria as a "terrorist" offshoot of the Kurdistan Workers Party (PKK), which has fought a bloody insurgency inside Turkey for the past 35 years.

Turkey has already carried out two cross-border offensives into Syria, including one in 2018 that saw it and allied Syria rebels overrun the majority Kurdish Afrin enclave in the northwest.

Which fold? There are dozens.