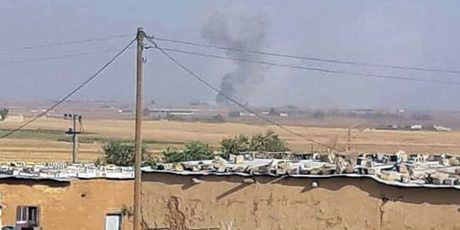 De Montchalin said France, Germany and Britain were working on a joint declaration "which will be extremely clear on the fact that we very strongly condemn" the Turkish campaign against Kurdish forces in northeast Syria.

The minister also told parliament's foreign affairs commission that France would bring up the matter at the United Nations Security Council.

French President Emmanuel Macron had earlier expressed concern at the prospect of a Turkish army operation in areas controlled by the Kurdish forces, who have led the fight against the Islamic State group in Syria.

He hosted a senior Syrian Kurdish official, Ilham Ahmed, for talks on Tuesday "to show that France stands alongside the Syrian Democratic Forces (SDF) as they are partners in the fight against Daesh (IS) and that we are very worried by the possibility of a Turkish operation in Syria," a presidential aide told AFP.

The SDF is dominated by the Kurdish People's Protection Units (YPG).

Ankara considers the YPG as an arm of the outlawed Kurdistan Workers Party (PKK) that has waged a three-and-a-half decade insurgency against Turkey.

The hypocrisy is limitless. Did France condemn the Russian bombing of Aleppo and other Syrian cities?

First the bad news, I like the Kurds and they deserve their long overdue Kurdistan
Then the good news, Syria will shrink ... again. The Turks took Antioch and surrounding territories a century ago from Syria and now they’re repeating this with the buffer zone . Haha

Israel took the Golan from them and Lebanon took Baalbek from them as well.... losers lose!

The Assads are the worst Syrian leaders in the country’s modern times. Let them be remembered as such.