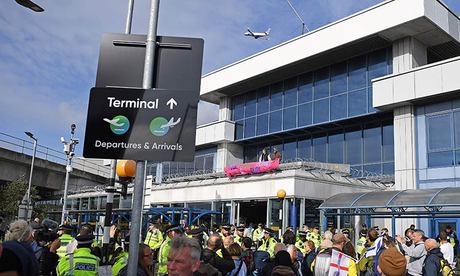 AFP reporters saw uniformed officers carry or escort around 100 Extinction Rebellion demonstrators from outside London City Airport. Police said they had made "a number" of arrests.

A man in a brown business suit climbed over coils of barbed wire and onto the roof of the east London airport's entrance before coming back down and being led away by the police.

Dozens more staged a sit-in at the nearby train station during the morning commute.

"I decided to come and join them because I think they have a just cause," pensioner Steve Phillips told AFP as around a hundred campaigners rallied in the presence of dozens of police.

"People are flying in and out, and the cost for the planet is unimaginable."

Airport and Aer Lingus airline officials told AFP that a morning flight to Dublin had to be delayed by nearly two hours after a ticketed passenger got up to make a speech about the climate as the plane prepared to take off.

A London City Airport spokesman said the captain exercised his right to arrest the passenger under international flight safety rules.

Airport officials said the hub was managing to stay "fully open and operational" by limiting entrance to the main terminal to ticketed passengers.

"Targeting an airport and inconveniencing travelers in this way is wholly unacceptable and irresponsible," London's Metropolitan Police warned in a statement.

The year-old group backed by Swedish teen activist Greta Thunberg is spearheading a two-week global action that kicked off Monday with partial shutdowns of traffic in cities stretching from Sydney to New York.

Campaigners also blocked a street outside the Louvre Museum in Paris and a bridge overlooking the Reichstag parliament building in Berlin.

Extinction Rebellion had announced it was planning a "Hong Kong-style" occupation of London City Airport because of the small hub's ongoing expansion plans.

It lies some three miles (five kilometers) east of the Canary Wharf business district -- one of Britain's main financial centers -- and the nearby bustling City of London.

The group's colorful and peaceful protests have managed to attract a mass following since its creation by a group of UK academics studying the effects of harmful carbon emissions on Earth.

Its past big event in London in April managed to shut down central parts of city for 11 days and led to more than 1,000 arrests.

Police are now being more assertive.

London's Metropolitan Police on Thursday enacted a rarely-used measure in the 1986 Public Order Act aimed at preventing "serious disruption to the life of the community."

"Any assembly linked to the Extinction Rebellion 'Autumn Uprising' and those linked to it who wish to continue their assembly MUST go Trafalgar Square and only assemble in the pedestrian area," the police statement said.

"Should you fail to comply with the conditions you run the risk of being arrested and prosecuted."

Extinction Rebellion has vowed to continue targeting the airport until Saturday evening -- and to wind down their global action only at the end of next week.

The group wants governments to adopt policies that cut harmful emissions to a net level of zero by 2025.

Britain has set itself the target of 2050.