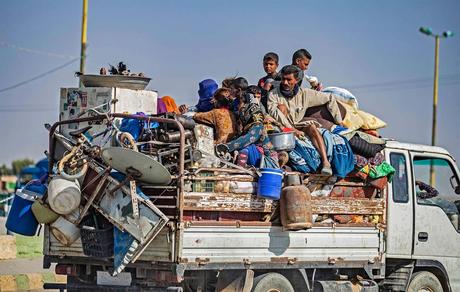 The autonomous Kurdish administration in northeast Syria said Friday it started evacuating a camp housing 7,000 displaced people to protect them from Turkish shelling.

The Mabroka camp, which lies 12 kilometers (seven miles) south of the border, was hit by shelling "which posed a direct threat to the lives of more than 7,000 displaced people," a statement said.

The civilians are due to be transferred to a camp known as Arisha, which is located further south in a region that has not been targeted by Turkey.

Turkey and its Syrian proxies launched a broad offensive against Kurdish-controlled areas of northeastern Syria on multiple fronts along the border.

Ankara wants to establish a buffer between its border and the Kurdish forces, which they consider a terrorist organisation due to their links with Turkey's main Kurdish insurgency.

Turkey has used air strikes and heavy artillery, as well as grounds troops, to break Kurdish resistance in some of the main border towns, which have already largely emptied of their population.

According to the United Nations, at least 70,000 people had fled their homes by Thursday evening.

The region was already home to several camps sheltering tens of thousands of people who had been displaced in prior phases of Syria's eight-year-old conflict.

Among them are more than 700 relatives of men suspected of being members of the Islamic State jihadist group.

No transfer was under way from Ain Issa yet but the Kurdish authorities said they were looking for a solution.

The Kurds and many foreign leaders have voiced concern that the Turkish invasion would divert key security forces away from the camps where IS suspects and their families are held, and create an opportunity for mass breakouts.