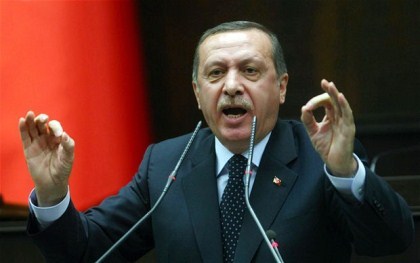 "After we launched our operation, we have faced threats like economic sanctions and embargoes on weapons sales. Those who think they can make Turkey turn back with these threats are gravely mistaken," Erdogan said in a televised speech.

France and Germany said Saturday that they were suspending arms exports to Turkey over its offensive in Syria against the Kurdish People's Protection Units (YPG).

Turkey sees the YPG as a terrorist off-shoot of Kurdish rebels in its own territory, but Western powers used the Kurds as the main ground force against the Islamic State group.

Erdogan said he spoke with German Chancellor Angela Merkel by phone on Wednesday and raised the issue of the arms embargo.

"I told her to explain it to me. Are we really allies at the heart of NATO, or has the terrorist group (the YPG) been accepted into NATO without my being informed?" he said.

He also rejected the idea of any mediation between Turkey and the YPG.

"When did you see a state sit at the same table with a terror group?" he said.

Erdogan said the Turkish military and its Syrian proxies now controlled the border town of Ras al-Ain, while Tal Abyad was being besieged from two directions.

Erdogan is the new face the West hates.
Because he attacked the Kurds that Israel and America loves so much.

By the way, it was the Resistance, Syrian Government and Russia that won against ISIS.

Neither America nor the Kurds, all they fought for was a Kurdistan.

Erdogan is a hero for the salafis, but his attack on Syria makes it hard for the West aswell, because it is two western allies slaughtering one another now.