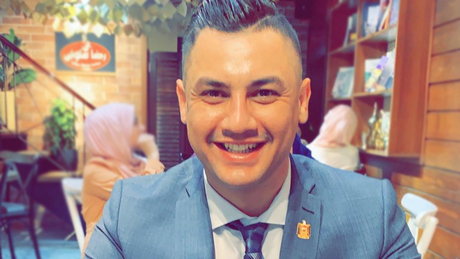 Armed men in uniform seized a prominent Iraqi blogger from his home on Thursday, one of his relatives told AFP, after a wave of deadly anti-government protests earlier this month.

The authorities have not confirmed reports of Shujaa al-Khafaji's arrest. The armed men who allegedly snatched him from his home did not identify themselves or hand over an arrest warrant.

Khafaji uses his Facebook page Al-Khowa al-Nadifa (Those Who Have Clean Hands in Arabic) to publish posts on political and social issues. The page has some 2.5 million readers in Iraq.

Last month, he had faced cyber harassment after a string of attacks on military bases the Hashed al-Shaabi, the paramilitary force dominated by pro-Iran groups.

"On Thursday, at 5:30 am (0230 GMT), a group of men in special forces uniform broke into his house and took him in the direction of the Al-Muthanna airport prison," in central Baghdad, a relative of the blogger told AFP on condition of anonymity.

Iraq was gripped by anti-government protests between October 1 and 6, during which 110 people, mainly demonstrators, were killed in clashes with the security forces.

At the time, unidentified armed men in uniform raided several local television stations, destroying their equipment and intimidating their staff.

The authorities say they are probing these incidents, but some in Iraq accuse the state of complicity.

Influential Shiite leader Muqtada al-Sadr, who has called on the government to resign, wrote on Twitter that "any act of aggression (against journalists or activists)... by the state constitutes an attack on freedom of speech".

"It is impossible to silence the free media... The attackers must be held accountable for their actions," he added.

He also claimed to have lost touch with another online activist, Maytham al-Helu.

"I don't know where the state wants to go with this kind of messages, especially when it claims it is not targeting bloggers, journalists and activists," Wajih said.

Khafaji's friends said on Facebook that before he was snatched "he had been followed and all the phones and computers at his home seized."