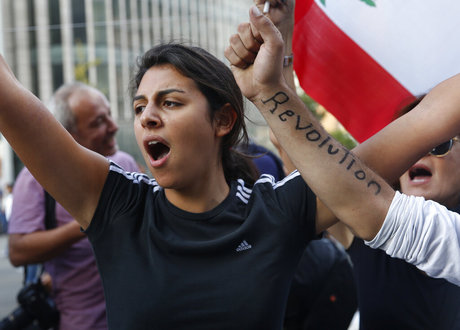 An unprecedented protest movement has gripped Lebanon for almost two weeks, demanding an overhaul of a political class viewed as incompetent and corrupt.

An announced tax on calls made through free phone applications sparked the demonstrations, but that was just the latest in a long list of economic grievances that have spurred exasperated Lebanese to protest.

Here are some of them:

Most Lebanese pay two bills for their power -- the first to an ailing state electricity company, and the second to expensive private generators for the three to 12 hours each day when mains supply cuts out.

Consultancy firm McKinsey ranked the country's electricity supply fourth from bottom in the world, following Haiti, Nigeria and Yemen, in a report covering 2017 and 2018.

Many say they are fed up with paying the state for intermittent tap water they describe as undrinkable. Most also pay for drinking water and private tankers to deliver water when pipes run dry.

More than 25 percent of Lebanon lives in poverty, the World Bank says.

Unemployment stood at 10 percent in 2012, according to official figures, though many claim the real number is higher.

It estimated that 200,000 Lebanese have been pushed into poverty as a result of the eight-year civil war in neighboring Syria.

An additional 250,000 to 300,000 Lebanese citizens are estimated to have become unemployed, most of them unskilled young people.

In the northern city of Tripoli, which has emerged as a nerve center of the protests, 57 percent of the population live at or below the poverty line, according to a 2015 study by the United Nations.

More than a quarter of the city's residents suffer extreme poverty, it said.

Inequality has been a major rallying call of the protesters.

The top one percent of the population make nearly 25 percent of national income while the bottom 50 percent make little more than 10 percent, according to the World Inequality Database.

In recent weeks it has become difficult to withdraw dollars from ATMs, despite the Lebanese pound being pegged to the greenback.

Unofficial money exchangers have been selling dollars for far above the fixed rate of 1,500 pounds.

Growth in Lebanon has plummeted in the wake of endless political deadlock in recent years, compounded by the 2011 breakout of civil war in neighboring Syria.

It stood at around 0.2 percent in 2018, far below growth of more than 10 percent in 2009. It is expected to remain stagnant this year, according to the International Monetary Fund.

Economists are deeply concerned by the country's crippling debt of $86 billion.

This equates to roughly 150 percent of gross domestic product, one of the highest rates worldwide.

But by the end of 2018, it had failed to make good on a promise to donors to reduce its budget deficit, which reached a record $6.2 billion -- over 11 percent of GDP.

This year's budget, adopted seven months late, aims to reduce the deficit to 7.6 percent of GDP.

Saad Hariri, who resigned as prime minister Tuesday, promised last week after days of protests to reduce it to 0.6 of GDP under the 2020 budget. Economists said this was unrealistic.

In July, parliament passed an austerity budget as part of conditions to unlock $11 billion in aid pledged at a conference in Paris last year.

But with no real progress made on reforms since, the financial aid has been held up.

Lebanon has received only part of the aid promised at several previous conferences, after it failed to honor its promises to bring about substantial economic change.

The solutions seems obvious: Hold another aide conference in Paris but don't accept conditions from the donors. Another option is for Iran to provide financial assistance to get Lebanon back on its feet. If none of those options work, it may make sense to reach agreement with Israel to develop the natural gas fields, although the price of gas is low.

Could you imagine the effects and probable results of peace with Israel vastly improving the economic situation of the country.
Electricity - a reliable supply by connection with the Israeli National Grid at a much cheaper rate than having to purchase it from the Turkish ships.
Ports and Airport - cutting down on smuggling, bringing in many millions to the National Treasury.
Natural Gas - agreements with the Israelis to develop the Lebanese fields for both internal use and joining the Israeli-European export pipeline, bringing in many billions to the National Treasury.
Need I go on.

All of these massive problems for our little country? Oh my...

Let's hope our best minds are asked to help the government dig themselves out of a hole.

And no, the following won't help: devaluation of the the Lebanese pound, excessive garbage, bushfires, additional taxes, high unemployment...

On second thoughts, if we can't see through a revolution, maybe we simply just have to accept this new reality.

God save us all.

Let's step back and look. We must have good relationship with one neighbor at least.

Do you pick a poor neighbor that has similar problems or strong neighbor that is supported by all 5 veto countries. I chose two in order to bring Lebanon back as small Paris.