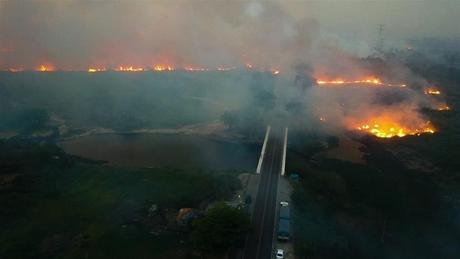 Wildfires are raging across the Pantanal tropical wetlands in southern Brazil, one of the most biodiverse areas in the world and a major tourist destination, regional authorities said Thursday.

The governor's office in the state of Mato Grosso do Sul said the fires were "bigger than anything seen before" in the region.

The blazes follow other wildfires that environmental groups say ravaged millions of hectares in the Amazon rainforest in August.

The statement from the governor's office said the situation was "critical," with blazes ravaging three towns in the Pantanal, a popular eco-tourism spot.

"Intense flames and reddish smoke have disrupted traffic" on the highways, the statement said.

Satellite images from the INPE space institute showed there were nearly 8,500 fires in the Pantanal area between January and October this year.

That was the worst record since 2007.