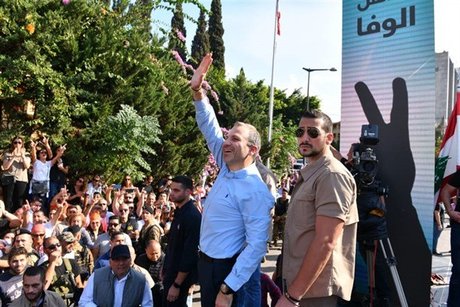 Free Patriotic Movement chief and caretaker Foreign Minister Jebran Bassil on Sunday noted that the people have “turned the tables,” as he slammed political rivals as “corrupts” and “thugs.”

“We had warned our partners that we would reach this stage and the people (who took part in the unprecedented popular revolt) acted before us and turned the tables and we are here to back them,” Bassil said at an FPM rally near the presidential palace in Baabda, reminding of his recent warning that the FPM would soon “turn the tables” in the country.

“We are not all corrupt and thugs. The corrupts are those who built their castles from the money of the people and the thugs are those who blocked roads and asked for extortion money,” Bassil added.

The FPM and its allies have accused Lebanese Forces supporters of “setting up checkpoints” that evoke the civil war era and of practicing extortion, claims that the LF and the protest movement have both dismissed as rumors.

“The priority today is for delaying the financial collapse, not for speeding it up, and let us call for accountability to purify our policies and achieve our demand of building a civil state without toppling the system,” Bassil added.

“We do not accept the end of the revolution with endurance of the corrupts and the departure of the upright officials,” he said.

“We dare anyone to prove that we are part of any suspicious deal,” he went on to say.

He added: “We moved from (the slogan) ‘all means all’ to ‘them alone’ because the main goal was the ouster of the president’s tenure but no one can eliminate us.”

The pro-Aoun demo in Baabda comes after more than two weeks of massive nationwide anti-graft protests that brought down the government.

Another such anti-graft demonstration is planned in Beirut to demand a complete overhaul of a political system deemed inefficient and corrupt.

In Baabda, Aoun supporters said they backed the general demands of protesters nationwide, but insisted the president was the only man able to bring about reforms.

So when the cowardly sewer rat, the senile deserter and the embezzling dwarf warned that the popular protest should not the exploited by political parties, they meant the other political parties. Another example of the FPM's slogan "do as we say, not as we do".

This thug bought half a mountain in La2lou2 and built a castle on it.

The top of my list of candidates to be executed

They've been preparing for this demo since Wednesday and this is all they could muster. This is embarrassing no only compare to the huge crowds they used to gather but also compared to the one they had three years ago when the president was elected and moved back to baabda. And for this one they had to organize their and some Qawmi and Hezbollah supporters, bussing many of them from every corner of the country, some of those had to spend the night around the baadba palace last night and they couldn't make the numbers.

I'm still confused about the few Lebanese that are bought, used and abused by the FPM'ers..

We should actually be trying to deport them... the Supporters.. they're the blind and yet big problem

@gma bs artist
Correct!
They were not able to gather over 20K, including the busses that came from Damascus ans Aleppo... Pathetic indeed.

A picture tells a thousand words.. look at how nervous his body guard is haha

I bet his bodyguards fought about "not wanting to stand with him"..
The fact is no one likes this guy... not even the FPM'ers..

They all got paid.. pay day and they're chanting for the midget.. what a circus and insult...
This guy is evil and nothing else...