'If Only' Mary Poppins Had Been Trump's Nanny 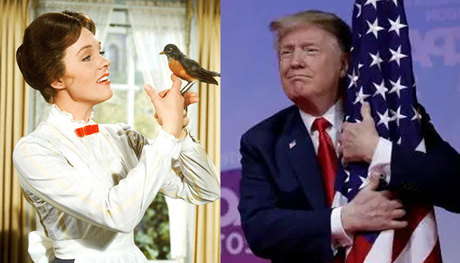 If Mary Poppins had been U.S. President Donald Trump's nanny, she would have "shaped him up pretty quickly," says Julie Andrews, the actress who immortalized the singing governess with magical powers on the big screen.

"If only she had had the chance to try!" joked the 84-year-old British performer at the presentation of the latest instalment of her memoirs in London on Saturday.

Andrews and Poppins have been intertwined in the cultural conscience ever since Walt Disney's 1964 musical comedy.

But the film that made her famous was just one in a long and storied career.

"I have been working professionally for 75 years," said the short-haired star, who appeared to have lost none of her vitality.

She was also the leading lady in another timeless classic: "The Sound of Music".

In that wholesome musical, Andrews leaps, bounds and sings in the Austrian mountain pastures while seducing the noble widower -- played by Christopher Plummer -- whose numerous offspring she looks after.

Each mention of these two films raised whoops of joy and applause from the mixed-age audience gathered at London's Royal Festival Hall, with one young woman even dressed as Poppins.

"Dame" Julie, who was honored by Queen Elizabeth II in 2000, regaled British actor Alex Jennings ("The Crown") with anecdotes from her unique career, always careful to keep up her good girl image.

Her parents, who were also in the entertainment business, discovered Andrews' talent for singing at an early age, and her father-in-law taught her classes at the age of seven.

"I hated it," she recalled.

"I could hit high notes that would make dogs howl."

She soon took to the stage and performed on London's music hall scene until she was 18, before moving to Broadway.

Her life changed one evening while she was playing in "Camelot", when Walt Disney entered her dressing room and invited her to play in a film, even though she had never shot one before.

She still regards it as one of the highlights of a career that saw her go on to win an Oscar.

But the author of the Mary Poppins book, Pamela Travers, was initially less impressed, telling Andrews: "You are far too pretty for it. But you have the nose for it," recalled the actress.

Andrews is now based in Hollywood, and was married for 41 years to her second husband Blake Edwards, a well-established director 13 years her senior, until his death in 2010.

He directed her in several films, including the musical "Victor/Victoria", in which she played an unemployed singer who was offered the role of a man playing a woman in a cabaret in Paris in the 1930s.

After the launch of the #Metoo movement, she told reporters that the reputation of "Blacky" -- as she called Edwards -- within Hollywood protected her from any form of harassment.