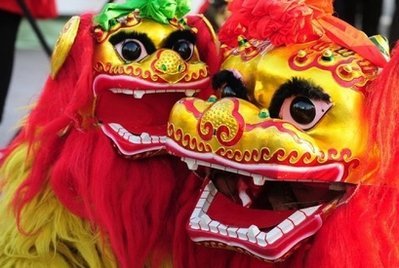 Asia rang in the Year of the Rabbit on Thursday with fireworks, lion dances and prayers that the bunny will live up to its reputation for happiness and good fortune in 2011.

From Sydney to Pyongyang, the Lunar New Year was marked by a thundering barrage of firecrackers, family feasts -- and rabbits galore.

In Beijing, as in cities across China, fireworks lit up the sky at midnight as millions of revelers celebrated the arrival of the Year of the Rabbit. The salvo rumbled on through the early hours of Thursday.

Fire authorities in the capital were on high alert against possible deadly fires sparked by the festivities with the city tinder-dry because of a three-month drought across northern China.

Fireworks are set off to ring in the year and ward off evil spirits but each year hundreds are reported hurt or killed in accidents across the nation of 1.3 billion people.

"We let off firecrackers to chase away the 'nian', a bad animal in Chinese legend. That way, it will not come and disturb you... It's tradition," said Wang Kuang, one of many visiting the huge temple fair in Beijing's Ditan Park.

A five-star hotel in the northeastern city of Shenyang was gutted by fire early Thursday, in what police said was a blaze triggered by the festive explosives, Xinhua news agency reported. No one was hurt.

Snow and chilly weather across much of China failed to dampen the cheer of hundreds of millions of merry-makers who made their way to hometowns for the holiday, in what is considered the world's largest annual human migration.

An estimated 700 million people had traveled home or were still on the move in an annual exodus that swamps the nation's transport grid.

Chinese are frantic to return home for the holiday, which runs through next week, as it is the only time that many of the country's estimated 230 million migrant workers are able to visit their parents, husbands, wives or children.

During the holiday, families typically gather for several days of feasting and partying, while youths receive cash gifts of red envelopes, or "hong bao".

The Internet is driving a Chinese New Year rabbit-related spending frenzy, with thousands of online discounts offered for everything from alcohol to food and trips.

People are also rushing to buy bunnies as pets, sparking concern among animal rights activists that the cuddly creatures could suffer from neglect or be abandoned once the novelty has worn off.

The rabbit, occupying the fourth position in the Chinese zodiac, is closely linked to the moon and symbolizes happiness and good fortune.

In Taiwan, those hoping to try their luck early in the new year are snapping up lottery tickets, with the jackpot, due to be unveiled on Friday, expected to reach Tw$1 billion (US$33 million) after eight consecutive rollovers.

In Sydney, where more than 50 Lunar New Year events will take place, organizers were planning a vibrant street parade for Sunday night expected to draw 100,000, and dragon boat races in the city's Darling Harbour.

In South Korea, more than 31 million people, or 62 percent of the population, were expected to be on the move this week. Highways were jammed and flights sold out.

Relatives separated by the world's last Cold War frontier will gather near the border with North Korea for annual events publicizing the plight of divided families.

In the North, where the holiday was only restored in 1989, leader Kim Jong-Il attended a Lunar New Year concert symbolizing "the indomitable heroic spirit" of the communist state's army and people, official media said Thursday.

Many -- including brokerages -- are banking on the sensitive rabbit to usher in a calm 12 months after the tiger brought a spate of deadly natural disasters to China such as earthquakes and mudslides.

But the bunnies in a video cartoon that went viral on the Chinese Internet were anything but tranquil.

Their revolt against brutal tiger overlords -- a thinly veiled swipe at China's communist rulers -- was a huge hit before the video was yanked by online censors.

And in Malaysia, flash floods have ruined the holiday mood, with key roads closed to traffic and the train service to Johor state and neighboring Singapore canceled.

"How do you expect me to think of Lunar New Year celebrations?" Lim Jun Den, a businessman in Segamat town who estimates he lost nearly $100,000 worth of electronics merchandise, was quoted as saying by the Bernama news agency.