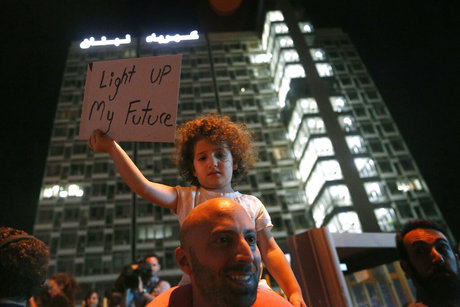 Lebanon’s anti-corruption protesters on Thursday staged a demo outside the headquarters of state-run Electricite du Liban in Beirut’s Gemmayze area to denounce chronic power cuts and an institution seen as a symbol of Lebanon’s dysfunctional political system.

Protests were also held outside ex-PM Fouad Saniora’s house on Beirut’s Bliss Street and outside his office in the Sidon district town of al-Hlaliyeh.

Saniora on Thursday gave a three-hour testimony before Financial Prosecutor Ali Ibrahim in the case of “the $11 billion spent between 2006 and 2008,” the National News Agency said.

Protesters on Bliss Street later headed to the area outside the house of caretaker Telecom Minister Mohammed Choucair in Hamra.

Al-Jadeed TV meanwhile reported that three protesters smashed the glass façade of the Kababji restaurant on Hamra Street despite an attempt by other demonstrators to stop them. Saniora and his son have been accused of owning shares in the restaurant chain. Kababji issued a statement Thursday denying that the restaurant is owned by “any incumbent or former premier, minister or MP.”

In the northern city of Tripoli, where mobilization has been relentless since the protests erupted on October 17, demonstrators took down politicians' portraits from city buildings and replaced them with the Lebanese flag.

They should demo in front of the houses of these thieves!

I wonder why they don't hang out outside of Bassil's fortresses or even Baabda not to mention Ain el Tineh. I wouldn't expect to go in front of Nasrallah's house as he's Sans Domicile Fixe (SDF).