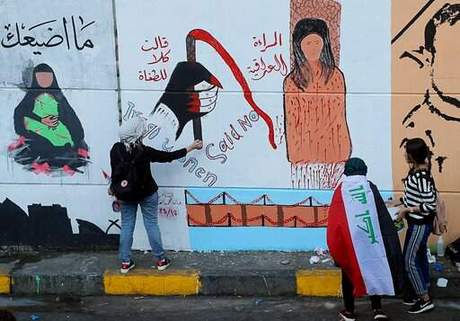 Taking vibrant spray paint to Baghdad's grimy concrete walls, Iraqi artists protesting against the government -- many of them young and female -- are sketching out their vision for a brighter future.

Their murals have transformed a monochrome tunnel leading into the main protest camp in Tahrir (Liberation) Square into a revolutionary art gallery.

"We have plenty of artists in this country but nowhere they can express their art, so we decided to use Tahrir for an art revolution in addition to a national revolution," says Hussam, her white veil covered in pink flowers.

Among her works is a version of World War II-era feminist icon "Rosie the Riveter," now with an Iraqi flag painted on her cheek and announcing in speech bubble: "This is what our women are like!"

Iraq, where around 60 percent of its 40 million people are below 25, remains a largely conservative country.

Baghdad is more open-minded than the tribal south, where it is rare to see women interact with men who are not their relatives or spouses.

But protests in the capital and Shiite-majority southern provinces have seen women break the taboo, joining thousands of demonstrators en masse to demand regime change.

Hussam has joined them this week, with her older brother cautiously but proudly looking on as she paints.

Her latest is an ode to fellow women taking part: a veiled woman holding a sign bearing one of the popular uprising's many slogans: "I want my country."

The young artist takes a brush daubed in white paint to a large black background in the tunnel, inscribing popular protest chants into the shape of a map of Iraq.

"We are the generation of change -- change for the better!" says Abdelwahab.

Dozens of other young artists are working on their own pieces.

One mural shows the three-wheeled rickshaw known as a tuk-tuk, now a beloved symbol of the protest movement for its role in ferrying wounded demonstrators to safety.

Another displays the word "LOVE" spelled out by bloodstained hands -- a testimony, the artist says, to those who have died facing off against security forces.

Nearly 300 people have died since the protests first erupted on October 1, according to an AFP tally.

Half of them lost their lives in an initial six-day wave of protests in early October, and the rest in deadly clashes with security forces or in fires set to party offices since rallies resumed on October 24.

Authorities have acknowledged the protests but say that "infiltrators" embedded in them are looking to plunge the country back into instability.

Iraq has only recently emerged from decades of back-to-back conflict, including a 1980s war with Iran, the US-led invasion in 2003 and a battle against the Islamic State group that ended in late 2017.

Abdelwahab says the protest movement is about the next phase of Iraq's future.

"We're not here to attack the state. We want to bring it joy and colors," he insists.

"In 16 years, I've never seen this place so beautiful. Our country really needed this," marvels Abbas, who has driven down the same tunnel to get to work for years.

"Usually, the walls are dirty and black," he says.

Baghdad, a sprawling city of nearly 10 million inhabitants, is usually choked off by traffic, smog and checkpoints.

"Young people were able to achieve what the state hasn't been able to do while spending billions on Baghdad," says Abbas, on his way to more swelling protests above ground.

Oil-rich Iraq is OPEC's second biggest producer, but one in five people live in poverty and youth unemployment stands at 25 percent, according to the World Bank.

Public services including electricity, water provision and street maintenance are poor, and the country is ranked the 12th most corrupt worldwide by Transparency International.

But the art developing underneath Tahrir is not just visual.

Every afternoon, musicians bring their clarinets and flutes for impromptu concerts, as woodworkers sell key chains and other statuettes immortalizing the tuk-tuk.

"With few means, these artists send a peaceful message to the world," says Ibrahim, 39, a bypasser.

Through them, he says, "we're telling the world that the Iraqi people are alive and well."