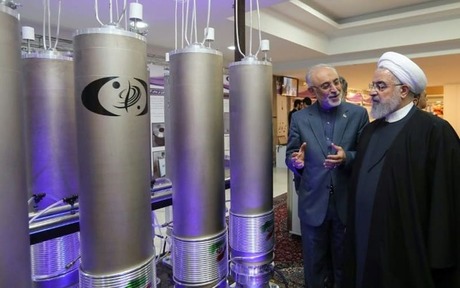 Iran said Saturday it is now enriching uranium to five percent, after a series of steps back from its commitments under a troubled 2015 accord with major powers.

The deal set a 3.67 percent limit for uranium enrichment but Iran announced it would no longer respect it after Washington unilaterally abandoned the agreement last year and reimposed crippling sanctions.

"Based on our needs and what we have been ordered, we are currently producing five percent," Atomic Energy Organisation of Iran spokesman Behrouz Kamalvandi told a press conference.

He said Iran has the "capacity to produce five percent, twenty percent, sixty percent, or any percentage" of enriched uranium, a claim often repeated by Tehran.

Uranium enrichment is the sensitive process that produces fuel for nuclear power plants but also, in highly extended form, the fissile core for a warhead.

In its fourth step away from the agreement, Iran resumed enrichment at the Fordow plant south of Tehran on Thursday, with engineers feeding uranium hexafluoride gas (UF6) into the plant's mothballed enrichment centrifuges.

Iran was already enriching uranium at another plant in Natanz.

Tehran emphasises the measures it has taken are swiftly reversible if the remaining parties to the deal -- Britain, China, France, Germany and Russia -- find a way to get around US sanctions.

On July 1, Iran said it had increased its stockpile of enriched uranium to beyond a 300-kilogramme maximum set by the deal, and a week later, it announced it had exceeded the enrichment cap.

The third move had it firing up advanced centrifuges on September 7 to enrich uranium faster and to higher levels.