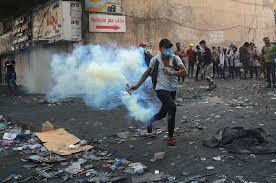 Iraqi officials must ramp up their response to mass demonstrations demanding an overhaul of the political system, the U.N. representative in Baghdad told AFP in an exclusive interview Wednesday.

Jeanine Hennis-Plasschaert, who heads the UN's Iraq mission (UNAMI), said the country's authorities must "step up to the plate and make things happen".

"They are elected by the people, they are accountable to them," she said.

Protests broke out in Baghdad and the country's Shiite-majority south in early October over rampant corruption, lack of jobs and notoriously poor services.

One in five people lives below the poverty line, despite the vast oil wealth of OPEC's second biggest producer.

The United Nations has proposed a phased roadmap that, in a crucial step, was endorsed by Iraq's top Shiite cleric Grand Ayatollah Ali Sistani after meeting Hennis-Plasschaert.

It calls for an immediate end to violence, electoral reform and anti-graft measures within two weeks followed by constitutional amendments and infrastructure legislation within three months.

Hennis-Plasschaert discussed the plan with lawmakers on the sidelines of a parliamentary session on Wednesday, telling them: "Now is the time to act, otherwise any momentum will be lost -- lost at a time when many, many Iraqis demand concrete results."

Protesters have escalated their demands to deep-rooted regime change, unimpressed by government promises of reform.

"There is lots at stake here. Public trust is at an all-time low," Hennis-Plasschaert told AFP.

"Nothing is more detrimental to public trust than saying 'A' and doing 'B.' Nothing is more harmful than overpromising and under-delivering," she added.

Hennis-Plasschaert, 46, was named UNAMI chief last year after having served as the Netherlands defense minister from 2012 until 2017.

She is one of the very few diplomatic figures who meets with Sistani, the revered 89-year-old cleric who never appears in public.

Following their meeting on Monday, she said Sistani, known as the marjaiyah, feared political forces were "not serious enough" to enact reforms.

"If the three authorities -- executive, judiciary and legislative -- are not able or willing to conduct these reforms decisively, there must be a way to think of a different approach," she warned at the time.

Pressed by AFP on what the "different approach" could be, Hennis-Plasschaert declined to elaborate, citing "the confidentiality we have with him."

"The conversation with Grand Ayatollah Sistani is always straightforward, open, and frank, but I cannot go into further detail," the top diplomat said.

Demonstrators gathering in the main protest camp of Baghdad's Tahrir (Liberation) Square on Wednesday said her meeting with Sistani helped bolster their crowds.

Hennis-Plasschaert met with protesters in Tahrir last month, even riding in the tuk-tuk rickshaw that has become an icon of the uprising for ferrying wounded protesters to medics.

"They are losing brothers and friends in the streets," she said of the young protesters she had met.

"We are witnessing rising numbers of deaths and injured every day. It's horrific," Hennis-Plasschaert said.

The protests initially fractured the political class but it has rallied in recent days to prop up the government of Prime Minister Adel Abdel Mahdi.

Hennis-Plasschaert told AFP she did not seek to be a counter-weight to Iranian influence but said she feared that "spoilers" could prevent progress.

"This country unfortunately knows many actors, external, internal, that could act as spoilers (and) undermine the legitimate demands of the people," she said.