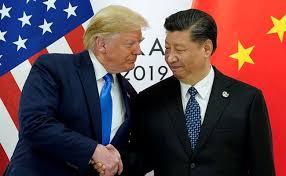 China on Thursday said eliminating tariffs was a "condition" for reaching a trade agreement with the United States, a demand U.S. President Donald Trump said earlier this month that he had rejected.

The Commerce Ministry's remarks showed a sizable distance still separates the Washington and Beijing dispute Trump's announcement last month that they had reached a "phase one" deal.

Beijing and Washington have been embroiled in an 18-month trade war which has weighed on the global economy, and two sides have slapped punitive tariffs on hundreds of billions of dollars in two-way trade.

Amid signs of easing tensions, the Chinese commerce ministry last week said the two sides had agreed on a plan to roll back tariffs in stages -- only to have US President Donald Trump deny that any such plan had been made.

Trump warned on Tuesday that he could even increase tariffs further if a partial deal with Beijing failed to materialize.

"The Chinese side has repeatedly stressed that the trade war should start with the addition of tariffs and should be abolished by the elimination of tariffs," Commerce Ministry spokesman Gao Feng said Thursday at regular briefing in Beijing.

"This is an important condition for the two sides to reach an agreement."

Trump last month held off on a round of tariff increases, and White House officials have suggested that as part of the current mini-deal he could delay fresh tariffs on $160 billion worth of Chinese goods planned for mid-December.

The partial deal could also include promises from Beijing to increase purchases of US farm goods and better protections for intellectual property rights.

Trump had planned to sign a pact with China's President Xi Jinping on the sidelines of the now-cancelled summit in Chile this month.

Since that summit cancellation no other meeting between the two has been announced.

Economic data show the uncertainty created by the dispute between the world's two biggest economies is undermining global growth.

The International Monetary Fund has cut its global growth forecast and warned that implementing all the announced tariffs would cut $700 billion out of the world economy next year.

In Washington, the U.S. Trade Representative's office welcomed the decision, saying it should help drive annual US poultry exports above $1 billion.

"Reopening China to U.S. poultry will create new export opportunities for our poultry farmers and support thousands of workers employed by the US poultry industry," U.S. Trade Representative Robert Lighthizer said in a statement.