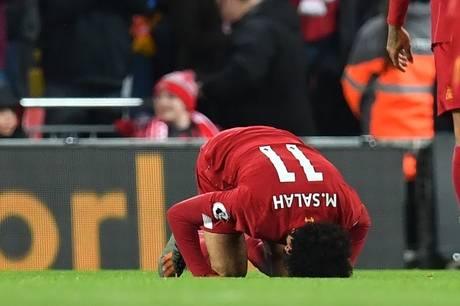 African superstar Mohamed Salah will not play for Egypt against Kenya on Thursday in 2021 Africa Cup of Nations qualifying because of a lingering ankle injury.

The 27-year-old forward was hurt against Leicester City last month and despite making several subsequent appearances for Liverpool, is suffering from slight discomfort in his left ankle.

Egyptian media reported that after Salah traveled from England to Mediterranean city Alexandria, national squad medical staff ruled him out of the Group G clash.

He will also miss the away fixture against the Comoros in Moroni next Monday.

Salah wore a protective boot on his left foot as he watched his Pharaohs teammates prepare in Alexandria to face the Harambee Stars at the 87,000-capacity Borg el Arab Stadium.

The absence of 2017 and 2018 African Footballer of the Year Salah is a major blow as Egypt rely heavily on him for goals.

Egypt have won the Cup of Nations a record seven times, twice more than Cameroon, but flopped as hosts of the 2019 tournament, losing to South Africa in the last 16.

Togo complete Group G and the top two finishers after a six-round mini-league qualify for the 24-nation finals in Cameroon.