In Swipe at U.S., BRICS Hit Out at Protectionism 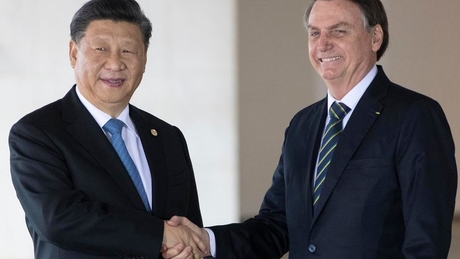 Five of the biggest emerging economies railed against protectionism on Thursday as they vowed to overcome "significant challenges" facing multilateralism, in a swipe at U.S. tariffs and unilateral action.

"Trade tensions and policy uncertainty have taken a toll on confidence, trade, investment and growth" in the global economy, said Bolsonaro, as he read out the declaration that also touched on conflicts around the world, including Syria.

"It is critical that all WTO members avoid unilateral and protectionist measures," he said.

"We reiterate the fundamental importance of a rules-based, transparent, non-discriminatory, open, free and inclusive international trade."

And the BRICS "reaffirm our commitment to helping overcome the significant challenges currently facing multilateralism."

The United States is locked in a protracted trade war with BRICS titan China, while it also has sanctions on Venezuela, whose president Nicolas Maduro is backed by Beijing and Moscow.

The 20-page statement made no mention of the economic and political crisis raging in Venezuela -- an issue that has divided the emerging markets group -- or unrest in Hong Kong, which Xi warned Thursday was threatening the "one country, two systems" principle governing the semi-autonomous city.

The other BRICS back Maduro.

Guaido supporters partially occupied the country's embassy in Brasilia on Wednesday, a few kilometers from where the BRICS were holding talks.

The standoff with Maduro backers ended after Guaido's appointed ambassador Teresa Belandria ordered them to leave for security reasons.

"Mounting protectionism and bullyism have eroded international trade and investment and are weighing down the world economy," Xi told business leaders on Wednesday.

Putin said "protectionism was thriving" amid the use of "unilateral sanctions."

Bolsonaro said earlier Thursday he would not get involved in a trade war, in an apparent attempt to distance himself from the two men and avoid upsetting his key ally, U.S. President Donald Trump.

While there have been no major announcements, the BRICS summit has given Bolsonaro the chance to deepen ties with Xi -- a relationship that only months ago looked to be in jeopardy.

Bolsonaro -- an ardent admirer of Trump with whom he shares a contempt for multilateralism and left-wing ideology -- has been under pressure from Brazil's powerful beef, farming and mining sectors to stay on good terms with China.

"We are talking to China about the possibility of a free trade area," Economy Minister Paulo Guedes told a forum on the sidelines of the summit, Brazil's state news agency reported.

"Our policy from the beginning was very clear: we are seeking higher grounds of integration."