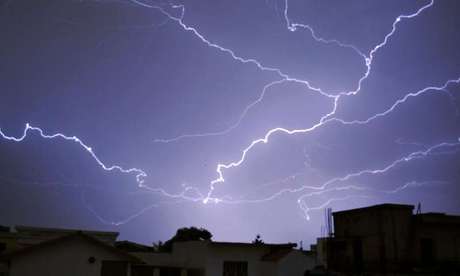 Thunderstorms and a heavy downpour caused havoc in several villages, destroying dozens of homes, in an unusual rainfall event that a meteorologist says could be linked to climate change.

It was the lightning strikes in 18 different places which had the greatest impact.

"We have so far confirmation of 18 deaths in our district," Abdulah Ahmed, the police chief of the region -- which is located in southern Sindh province and stretches over 22,000 square kilometers (8,500 square miles)-- told AFP.

He said that officers in each village had verified that each death was caused by lightning strike.

In contrast, lightning kills an average of three people each year in the UK, according to the Royal Society for the Prevention of Accidents.

The Thar desert, straddling the Indian border and one of Pakistan's poorest areas, is dependent on monsoon rains.

But such a heavy rainfall in November is "unusual", while "lightning of that intensity is unprecedented," said Dr Syed Sarfraz, a senior meteorological officer in Karachi.

He said the causes were still being investigated but suggested hot air over the desert had met with a cold air mass entering from Iran, fueling the storms. Climate change could also be playing a role, he added.

Dozens of tents and blankets were dispatched from Karachi in a relief effort for the families who lost their homes in the rain.