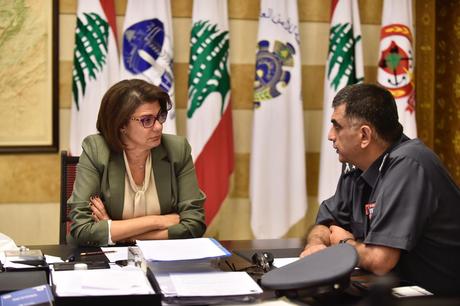 Caretaker Interior Minister Raya al-Hassan on Monday met with Internal Security Forces chief Maj. Gen. Imad Othman to discuss the security measures that will be taken by the ISF during Tuesday’s parliamentary session.

Al-Hassan also held phone talks with Army Commander General Joseph Aoun during the meeting to “coordinate the security steps that will be taken,” the National News Agency said.

MTV meanwhile reported that protesters have called for gathering Tuesday at 7:00 am at Beirut’s Martyrs Square to block roads and prevent the controversial legislative session from taking place.

“Protesters have held Speaker Nabih Berri responsible for any bloodshed tomorrow should he insist on holding the legislative session,” MTV added.

A controversial general amnesty law is on the agenda of the legislative session.

Protesters have vowed to prevent the session from being held through blocking all entrances leading to parliament.