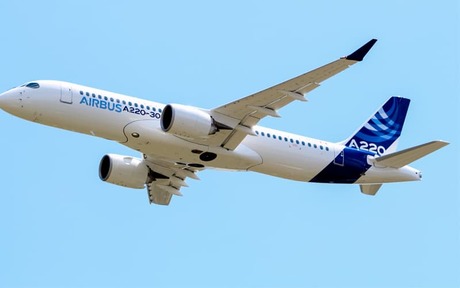 With Boeing embroiled in the 737 MAX crisis, Airbus has emerged as the star of the Dubai Airshow, with two mammoth sales to Emirates and AirArabia bolstered by several smaller deals.

However, Boeing secured one firm sale and another "letter of intent" for its 737 MAX aircraft, in what analysts said was welcome support for the model which was grounded in March following two fatal crashes.

Here is a breakdown of the deals.

Dubai-based Emirates Airline said it would buy 50 Airbus 350-900 widebody aircraft in a deal worth $16 billion, with delivery to begin in May 2023.

The airline, the largest in the Middle East, is reorganizing its fleet after cutting orders of the A380 superjumbo, which airlines have struggled to fill to its capacity of 500-850 people.

But it also said that discussion on purchasing the A330Neos could still be revived.

The UAE low-cost carrier, Air Arabia, said it would buy 120 Airbus A320s in an order worth $14 billion that represents a major expansion for the airline.

It currently operates 53 Airbus A320 and A321 aircraft, as it moves ahead with ambitions to add new routes to its network which takes in 170 destinations.

Air Arabia last month announced an agreement with Abu Dhabi-based giant Etihad Airways to launch a new low-cost airline based in the UAE capital, to be known as Air Arabia Abu Dhabi.

Turkish carrier SunExpress ordered 10 Boeing 737 MAX aircraft. The deal was for a relatively modest $1.2 billion but it represented "the first firm order" for the plane since it was taken out of service in March.

The sale comes on top of a previous SunExpress order for 32 of the aircraft.

"We have full confidence that Boeing will deliver us a safe, reliable and efficient aircraft," the airline's CEO Jens Bischof said.

"However, it goes without saying that this requires the undisputed airworthiness of the model, granted by all relevant authorities."

Boeing won another boost with Kazakhstan's flag carrier Air Astana saying it planned to buy 30 of the 737 MAX, with the "letter of intent" to be finalized in coming months.

Boeing said the planes would "serve as the backbone" of Air Astana's new low-cost carrier FlyArystan.

"We believe that the MAX will provide a solid platform for the growth of FlyArystan throughout our region, once the aircraft has successfully returned to service," said Air Astana President Peter Foster.

The last commercial landmark for the troubled model was in June when Boeing secured a letter of intent by British Airways parent IAG to buy 200 of the planes.

Air Senegal said it had signed a memorandum of understanding to purchase eight of Airbus' new A220 -- the single-aisle aircraft formerly known as the Bombardier C Series jet.

"These new 220 aircrafts will contribute to develop our long-haul network to Europe and our regional network in Africa," the national carrier's CEO Ibrahima Kane said.

Riyadh-based budget carrier Flynas, which is looking to expand in the growing Saudi domestic market, also opted for Airbus with an order for the A321XLR.

"We are very pleased to announce a firm order of 10 A 321 aircraft," said Bandar al-Mohanna, the CEO of the airline which is adding routes in South Asia and the Middle East.

Flynas also plans to open a hub in West Africa or the Balkans within five years to expand beyond the domestic market, its chief executive reportedly said earlier this year.

EasyJet converted options to firm purchases for the A320neo planes worth $1.33 billion at list prices, it said.

Ghana signed a memorandum of understanding to purchase three Boeing 787-9 Dreamliners, at a list price of $877.5 million, for a new national airline to be launched in the country.

General Electric said its airplane leasing arm, GECAS, had signed an order for 12 medium to long-range Airbus A330neo aircraft and 20 A321XLR aircraft, without giving a price on the deal.

The order for the A321XLR includes 13 new planes and the upgrading of seven A321 aircraft in GECAS' existing backlog.