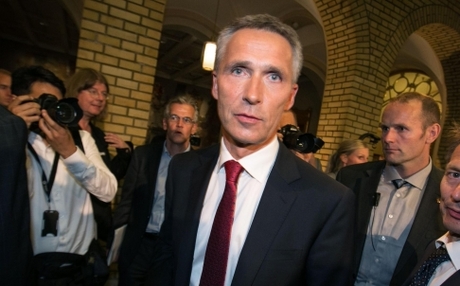 NATO chief Jens Stoltenberg said Tuesday he will visit Paris next week to seek an explanation from Emmanuel Macron after the French president dismissed the alliance as "brain dead."

Stoltenberg mounted a vigorous defense of NATO ahead of a meeting of alliance foreign ministers, saying it was doing more than ever and warning against undermining it.

The diplomatic shockwaves from Macron's forthright interview with The Economist continue to rattle NATO just weeks before a summit in London to mark the 70th anniversary of the alliance.

"I will go to Paris next week and there I intend to discuss these issues with President Macron -- I think that's the best way to address any differences, to sit down and discuss them and to fully understand the messages and the motivations," Stoltenberg told reporters.

"My message is that NATO is adapting, NATO is agile, NATO is responding."

Macron said he believed the alliance was undergoing "brain death", decrying what he called a lack of strategic coordination between Europe and the United States and lamenting NATO member Turkey's recent unilateral military incursion against Kurdish militias in Syria.

While French officials have argued that Macron was stating difficult but essential truths that other allies preferred to gloss over, his remarks have enjoyed little public sympathy -- other than from the Kremlin, which welcomed them warmly.

Several NATO members in eastern Europe -- where concerns about Russia run high, fueled by memories of Soviet domination -- were horrified at the Macron interview, in which he also called for moves towards rapprochement with Moscow.

The U.S. ambassador to NATO, Kay Bailey Hutchison, said Washington "firmly disagreed" with Macron's assessment of NATO and with his call for Europe to be able to ensure its own defense without U.S. support.

"The thought of only one of our countries or one of our groups of countries facing the enormous risks to our population alone is not even rational. We are stronger together," she said.

Another alliance source said Macron had "not found an echo in his savage criticism" among NATO diplomats and officials.

Others note that despite Macron's complaints, France itself has long resisted NATO expanding its political role, arguing it should be a purely military alliance.

Moreover, his complaints about unilateral action from Turkey came as France stood alone in the EU to veto the start of membership talks with North Macedonia and as allies fret that his overtures to Moscow could undermine Western unity on Russia.

The row over Macron's comments adds to the clouds looming over the December 3-4 gathering of NATO leaders in London.

Organizers will be hoping for a less mercurial performance from U.S. President Donald Trump than at the summit in Brussels last year where he caused consternation with his vehement criticism of defense spending by Europe -- and Germany in particular.

The London meeting also comes as tensions are running high with Turkey -- both over its operation in Syria and increasing closeness to Moscow, manifested most dramatically in Ankara's purchase of Russia's S-400 anti-aircraft missiles.