Days of Protests in Iran 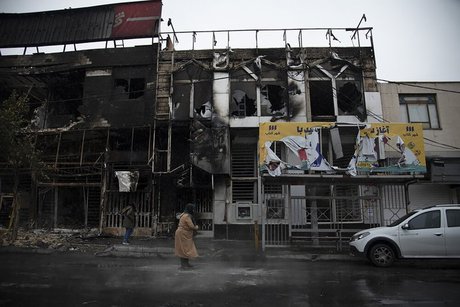 Iran has been gripped by protests since November 15, which broke out hours after the government raised fuel pump prices by at least 50 percent in the sanctions-hit country.

Here is a recap of the eruption of violence that followed.

The government announces the new measures on November 15, saying they are aimed at raising funds to help needy people through cash handouts.

Demonstrations break out in cities across the country with roads blocked and public buildings attacked.

There are fierce clashes in the central city of Sirjan, where rioters reportedly attack petrol stations and try to set fuel depots alight.

They are repelled by police, the Islamic Revolutionary Guard Corps and the Basij militia, an official is quoted by the semi-official ISNA news agency as saying.

There are new demonstrations in a string of cities on November 16, including the capital Tehran where drivers use their cars to block roads and protesters gather around a blazing vehicle.

Clashes break out between protesters and police in the central city of Yazd and 40 people are arrested, ISNA quotes the province's public prosecutor as saying.

The internet is almost entirely shut down on the orders of the Supreme National Security Council of Iran.

The outage stems the flow of videos shared on social media of demonstrations or associated acts of violence.

In a tweet directed at the demonstrators, U.S. Secretary of State Mike Pompeo says "the United States is with you."

On November 17 Iran's supreme leader Ayatollah Ali Khamenei speaks out in favor of the petrol price hike, blaming "hooligans" for the unrest.

Following his speech, parliament cancels a motion to reverse the petrol price hike.

President Hassan Rouhani defends the petrol price rise and warns that Iran could not allow "insecurity."

The White House condemns Iran for using "lethal force" and says it "supports the Iranian people in their peaceful protests against the regime.".

Images of footage of masked young men setting buildings ablaze is aired on state television, which rarely shows any signs of dissent.

Iranian media reports on November 19 that "rioters" stabbed to death three members of the Iranian security forces near Tehran.

In Geneva, the U.N. rights office warns that dozens may have been killed in the demonstrations and says it is alarmed by reports of live ammunition being used against protesters.

The London-based rights group Amnesty International says more than 100 protesters are believed to have been killed across the country.

May God free the Iranian people from their evil oppressors