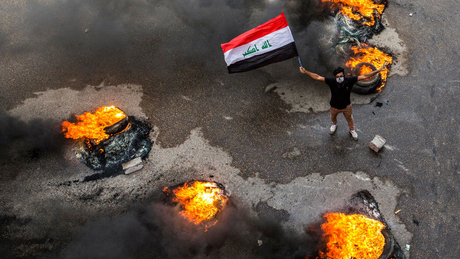 Lawmakers met in the evening to discuss a cabinet reshuffle and complete a first reading of a draft electoral law, amid other changes.

But activists in Baghdad's Tahrir (Liberation) Square had given them little credence earlier in the day.

"The trust between the people and the political class has eroded," said Khayriya, a woman in her sixties with an Iraqi tricolor wrapped around her neck.

"Even if they offer every Iraqi a house of gold, that would not help their case," she told AFP on Tuesday morning.

"Politicians are doing the reforms for themselves, not for us."

Protests demanding an overhaul of a political system deemed by many as inefficient and corrupt have rocked Baghdad and the Shiite-majority south since October 1.

The movement continues to gain momentum despite government pledges of reform and a violent crackdown that has left more than 330 people dead.

The gathering, which did not include embattled Prime Minister Adel Abdel Mahdi, proposed a raft of reforms and new legislation including the revamped electoral law, according to a summary seen by AFP.

If the reforms were not complete within 45 days, the top leaders pledged to call for early parliamentary elections or withdraw legitimacy from government, or both.

The priority for most political parties has been amending the country's electoral law, but protesters have snubbed the suggestions.

"Whether they amend it or not, the same figures will still return," said Haydar, 25, in Tahrir Square.

"It is a game of chess -- they will just move the pieces around," he told AFP.

In a rare move, Abdel Mahdi's office said he would head to parliament "soon" to deliver a fresh list of candidates to head ministries as part of the reshuffle.

But, after weeks of unrest, crowds again hit the streets, and schools and government offices remained shut, in Iraq's southern hotspots of Kut, Najaf, Diwaniyah, Hilla and Nasiriyah.

In Baghdad, they gathered in Tahrir and on the nearby Al-Sinek and Al-Ahrar (Free Men) bridges, parts of which were reoccupied by demonstrators this week.

"The young generation does not believe in amendments, or reform," said Abu Haydar, a man in his seventies.

"They believe in only one thing: the complete overhaul of government and parliament."