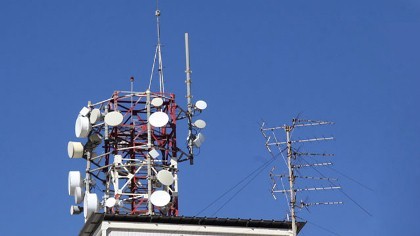 Ibrahim is also suing the directors of the Alfa and touch mobile network operators and the director general of the OGERO telecom authority on charges of “wasting and embezzling public funds and illicit enrichment,” referring the file to Beirut’s first examining magistrate.

LBCI television said Ibrahim is suing Sehnaoui and Harb over charges of wasting public funds while Jarrah is being sued over waste of funds and embezzlement charges.

Jarrah meanwhile condemned “leaking such news to the media,” noting that “the issue is purely judicial and cannot be publicized before it reaches its conclusion according to the legal norms.”

“Judge Ibrahim has been leaking news to the media for a while now, in a breach of legal norms and with the aim of insult and defamation,” Jarrah said.

“We reserve our right to take the appropriate legal measures, because it has become clear that what he did is part of the systematic political campaign to target our political camp,” the caretaker minister added.

When will the politically motivated and corrupt financial prosecutor question/sue Jebran Bassil regarding the $1.4 billion he took in 2013 to fix the electricity problem and guaranteed us 24/7 supply by 2015?

Ali Ibrahim is corrupt, he’s politicized... notice how he only targets one segment of the political spectrum.

The Aouni will get cleared.... just watch the written script unfold. It’s a farce .