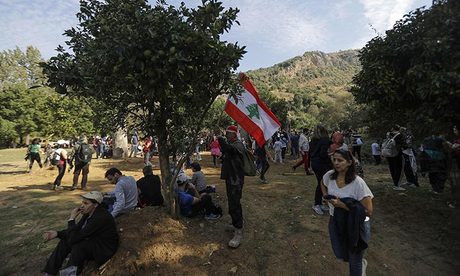 Surrounded by sweeping pines, lemon trees and bean stalks, hundreds of Lebanese protesters march along, chanting against a planned dam that would drown the valley under their feet.

Unprecedented protests about corruption in Lebanon since October 17 have given new life to activism against the controversial structure planned for a lush valley south of Beirut.

Since the start of the year, the future construction site in the Bisri Valley has been cordoned off and several trees uprooted to make way for work to begin.

But emboldened by the anti-graft protests, nature lovers have since November 9 ignored the gates and barged through them, hoping to save what remains of their country's ravaged ecosystem.

Environmental activists in Lebanon say they have their work cut out.

Standing on a shack roof near the Bisri Valley, environmental activist Bassam Zeineddine encourages hundreds of fellow hikers who have come to show their support for the dam protest.

"The trees are the only thing left that they haven't taken," he shouts, referring to the country's embattled officials.

"They've left us nothing else -- not water, nor air," rails the member of the "Save the Bisri Valley" movement in a country where the coastline, rivers and air are all polluted.

Protesters clap and cheer, before setting off to march around 20 kilometers (12 miles), walking stick in one hand and billowing Lebanese flag in the other.

Along earthen paths they head towards the heart of the valley, singing the national anthem before swiftly reverting to chants from recent anti-graft protests.

"We pay taxes, but their pockets are full!" they intone.

Deep in the valley during their hike, the protesters find a cement-making machine.

Roland Nassour, 27, says an ongoing survey of the valley has found several oaks and pines ripped from the soil, but that so far most of the valley's canopy has thankfully been spared.

"The environment is a key part of the revolution," says Nassour, who is also part of the movement to protect the Bisri Valley.

On Monday, he was one of nine activists called in for questioning by police after the construction company complained that gates had been broken and signs ripped down.

"We're proud of what we did," says Nassour.

On the banks of a meandering river, the hikers catch their breath near some lemon trees and toppled granite columns thought to be from the Roman era.

To the tune of famed Italian resistance song "Bella Ciao", they sing in the open to save the valley, accompanied by maracas and a harmonica.

"We want nature, we don't want to sell it. We want flowers, we want plains, we want forests and fields," they chant.

"We don't want a dam in Bisri. We want a nature reserve."

Clutching his walking stick, avid hiker Lucien says he has come to stress the need to "preserve a green Lebanon."

"We need more nature reserves," says the 30-year-old who works in advertising.

Mervat, a 59-year-old activist, said mismanagement of the forest fires in October provided a spark for the revolution.

"Lebanon is a champion when it comes to pollution," said the former laboratory supervisor from the southern city of Sidon.

"We want solutions, but the officials are not providing any."