Protesters March in Beirut amid Rival Demos in Baabda 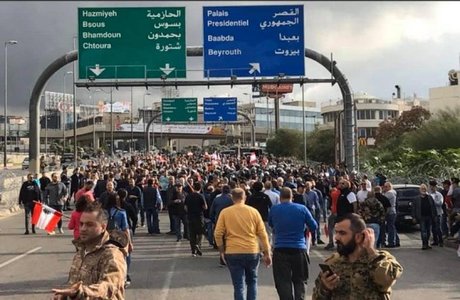 Anti-corruption protesters on Sunday marched from Hamra, Ashrafieh and Mathaf towards central Beirut as rival demos were held near the presidential palace in Baabda.

The army intervened to contain scuffles between the two groups after the National News Agency reported that the rival demonstrators had engaged in a “peaceful and optimistic” dialogue.

Scuffles had erupted Tuesday during similar demos in the area, prompting the intervention of security forces.

The protesters marched under the slogans “Sunday of Clarity” and “Unity and Solidarity of the Lebanese People”.

They called for the formation of a “transitional government” free of ruling parties’ representatives in order to “take urgent measures in the face of the economic collapse caused by the ruling class.”

Protesters also called for “the independence of the judiciary and the prosecution of corrupts and those who robbed public funds and public and private property including bank deposits.”

Carrying olive branches, some protesters called on the ruling parties not to try to scare them with “civil war” threats, emphasizing on the peaceful nature of the protests.

Protesters have called on President Michel Aoun to call for binding parliamentary consultations to name a new premier following the resignation of Saad Hariri on October 29.

Aoun has delayed the consultations, arguing that a prior agreement is needed on the shape of the new government in order to avoid a political clash and a lengthy formation process.

Whatever makes you sleep at night

Then you should know that your so called Christian Geagea and Gemayel received large sums of dollars from the Saudi Kings.

All of them means all of them and "insert name here" is one of them!