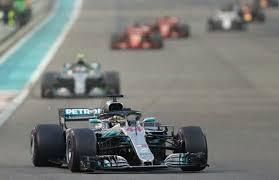 Lewis Hamilton marked his 250th Formula One race in style on Sunday, the newly-crowned champion cruising to a flawless victory from pole in the closing Abu Dhabi Grand Prix for his 11th win of the season.

Hamilton, who wrapped up his sixth world title with two races to go in Texas last month, was followed home at the Yas Marina circuit by Max Verstappen for Red Bull with the Ferrari of Charles Leclerc in third.