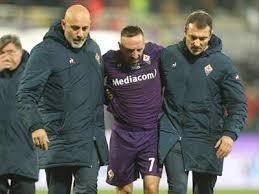 Ribery, 36, had to be helped off the pitch just before half-time after Greek midfielder Panagiotis Tachtsidis' sliding tackle left the French veteran in agony.

Tests revealed damage to the medial collateral ligament of the right ankle, the club said, adding his condition would be reassessed in the coming days.

The club did not reveal how long the former Bayern Munich player would be out for, but according to Italian media reports he could be sidelined until after Christmas.

Ribery has scored two goals for Fiorentina who are 11th in the Serie A table after Saturday's 1-0 defeat and next play Torino, Inter Milan and Roma before the end of the year.