Iraq Parties in Talks over New PM amid Unrelenting Protests 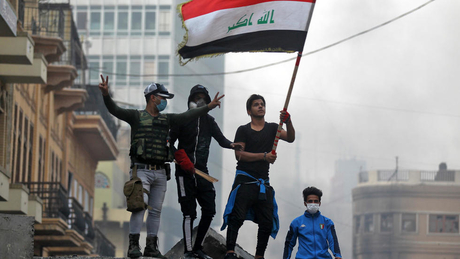 Iraq's rival parties were negotiating the contours of a new government on Monday, after the previous cabinet was brought down by a two-month protest movement insisting on even more deep-rooted change.

That followed a wave of violence that pushed the protest toll to over 420 dead -- the vast majority demonstrators.

Parliament on Sunday formally tasked President Barham Saleh with naming a new candidate, as prescribed by the constitution.

But Iraq's competing factions typically engage in drawn-out discussions and horsetrading before any official decisions are made.

Talks over a new premier began even before Abdel Mahdi's formal resignation, a senior political source and a government official told AFP.

"The meetings are ongoing now," the political source added.

Such discussions produced Abdel Mahdi as a candidate in 2018, but agreeing on a single name is expected to be more difficult this time around.

"They understand it has to be a figure who is widely accepted by the diverse centers of power, not objected to by the marjaiyah (Shiite religious establishment), and not hated by the street," said Harith Hasan, a fellow at the Carnegie Middle East Center.

The candidate would also have to be acceptable to Iraq's two main allies, arch-rivals Washington and Tehran.

"The Iranians invested a lot in the political equation in last few years and won't be willing to give up easily," said Hasan.

Protesters hit the streets in October in Iraq's capital and Shiite-majority south to denounce the ruling system as corrupt, inept and under the sway of foreign powers.

Iraq is the 12th most corrupt country in the world, according to Transparency International.

Despite the oil wealth of OPEC's second-biggest crude producer, one in five people lives below the poverty line and youth unemployment stands at one quarter, the World Bank says.

"We demand the entire government be changed from its roots up," said Mohammad al-Mashhadani, doctor protesting in Baghdad's iconic Tahrir (Liberation) Square on Monday.

Nearby, young law student Abdelmajid al-Jumaili said that meant that the parliament and even the president would have to go.

"If they get rid of Abdel Mahdi and bring someone else from the political class, then nothing changed. They'd just be two sides of the same coin," said Jumaili.

But the protesters' demand for an entirely new face has complicated the search for a new premier.

Two political heavyweights said they had opted out of talks on a new PM: former premier Haider al-Abadi and the unpredictable cleric Moqtada Sadr, who had backed the previous government until protests erupted.

"They're aware the bar is too high and it's too difficult for them to please the street," said Hasan.

At the same time, a totally new player is unlikely to be trusted by the established political class.

"The discussions now are over someone from the second or third tier of politicians," the government source told AFP.

"It's not possible to have someone new. It has to be someone who understands the political machine to push things along."

The government and political sources said parties were considering a "transitional" cabinet that would oversee electoral reform before an early parliamentary vote.

"This process will take no less than six months, in order to prepare for new elections according to a new electoral commission," the official said.

Abdel Mahdi, 77, is the first premier to step down since Iraq adopted a parliamentary system following the US-led invasion that toppled ex-dictator Saddam Hussein in 2003.

The factions that have accumulated power since then are struggling to "think outside the box" to resolve the current political crisis, Hasan said.

"This is the main pressure on them –- they realize they are dealing with a different situation and it needs completely different solutions," he told AFP.

Meanwhile, protesters have kept up rallies in Baghdad as well as further south in Diwaniyah, Hilla, Kut and the Shiite shrine city of Najaf.

The latter was rocked by clashes late into the night on Sunday between protesters and armed men protecting a revered tomb of a Shiite cleric.

Tribal fighters intervened to keep the peace, and a tense calm reigned over the city on Monday morning.

And in Nasiriyah, Abdel Mahdi's birthplace and the site of most of the deaths in recent days, protesters clung to their city center protest sites.

Iran will help stay living the misery that they have....