Man City Must Tighten Up at the Back, Says Guardiola 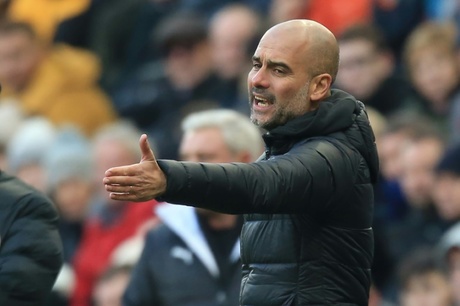 Pep Guardiola says Manchester City must tighten up in defense after they fell 11 points behind Premier League leaders Liverpool.

Guardiola is well aware of where the problems lie, without a clean sheet in any match since the 3-0 win against Aston Villa in late October.

"That is not good enough," he said. "We must improve.

"We had 26 shots, not all on target, at Newcastle. We had three or four one-on-ones with the 'keeper. They shot twice and scored. Always we try to prepare to create more and concede less."

But Guardiola said he would continue playing Fernandinho at the heart of his backline rather than restoring him to midfield, even though Ilkay Gundogan is suspended for the tough test at Turf Moor.

Since losing Vincent Kompany at the end of last season and Aymeric Laporte with a serious knee injury in August, the City boss has largely deployed the Brazilian at center-back, even when defenders John Stones and Nicolas Otamendi have been fit and available.

And he said Fernandinho would continue in the role.

"Right now yes," said Guardiola. "Because I like Dinho playing in that position a lot. That is why he plays. I prefer Gundogan and Rodri in this (midfield) position."

City snatched a 1-0 win at Burnley last season through a Sergio Aguero goal as part of their stunning late run to pip Liverpool to the title.

"He is not ready for the derby, but after the derby we will see," said the City boss.

Guardiola, whose side has mustered just one win in their past five games in all competitions, also called for his team to show belief and to be more clinical in front of goal.

"They have to believe we win tomorrow," he said. "That is the fact.

"We have to think about what we have to do to win the games and play quite similar to recent games, like Newcastle and except 20-25 minutes against Chelsea. We have to be more solid and score the chances we have."

Guardiola is expecting a tough night at Burnley.

"What Sean Dyche teams play, the way he plays they do perfect so they have incredible success in the last years in the Premier League doing what they have done They attack really well and in defense they are so aggressive."