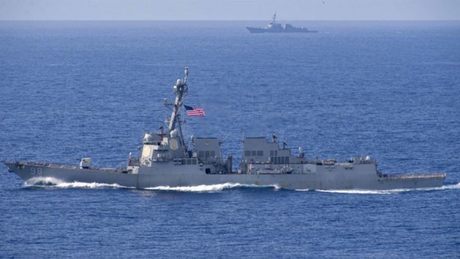 The United States said Thursday that it seized a major shipment of Iranian weapons bound for Yemen's Huthi rebels, denouncing what it called a violation of a U.N. arms embargo.

A U.S. warship interdicted the ship on November 25 off the cost of war-ravaged Yemen and found "sophisticated weapons" of Iranian origin including land-based, anti-tank and air-defense missiles, said Brian Hook, the U.S. special representative on Iran.

"This discovery is yet more proof of Iran's efforts to inflame conflicts in the region by proliferating deadly weapons to its proxies," Hook told reporters.

"It is also further evidence of how Iran repeatedly violates the U.N. arms embargo, which has been in place for over a decade," he said, referring to 2007 Security Council ban on Tehran's weapons exports.

Iran's Shiite clerical regime supports Huthi rebels who have seized most of Yemen despite an assault led by U.S. ally Saudi Arabia.

President Donald Trump has stood behind Saudi Arabia, including vetoing a congressional bid to end US assistance, despite wide criticism of Riyadh's air campaign, which has included strikes on hospitals and a school bus.

Tens of thousands of people have died in the conflict since 2015 and millions suffer food shortages in what the United Nations calls the world's worst humanitarian crisis.

The Trump administration has been seeking to counter Iranian influence throughout the Middle East including in Iraq and Lebanon.

Hook said that Iran should end its involvement, pointing to the opening of dialogue between the Saudis and Huthis.

"Iran clearly does not speak for the Huthis nor have the best interests of the Yemeni people at heart," Hook said.

Hook also announced that the State Department was offering a $15 million reward for information on Abdul Reza Shahlai, a senior officer of Iran's elite Quds Force who is allegedly operating from Yemen.

He has already faced U.S. sanctions over a purported plot to kill the Saudi ambassador in Washington.