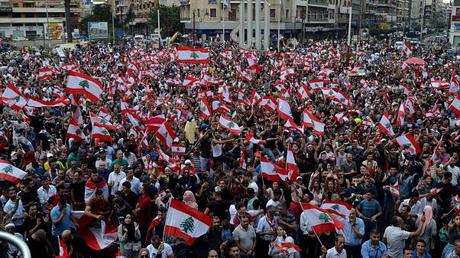 Despite reports that political parties have neared a consensus on supporting Samir Khatib for the post of PM-designate, “cautious anticipation” prevails as protests gear for mass rallies against that nomination Sunday, one day before the binding consultations.

President Michel Aoun is expected to initiate the binding parliamentary consultations to name a premier on Monday, al-Joumhouria daily reported on Friday.

Ministerial sources told the daily that no activity or contacts between political parties was recorded on Thursday regarding the formation of the government.

“Scheduling the consultations for Monday instead of holding them earlier, Thursday or Friday, remains a shady issue,” said the sources.

Despite “positives” on the course of government formation, ministerial sources fear that the time span extending until Monday is open to unexpected negatives, that would complicate matters further if it were to happen.

Activists have called for a massive protest on Sunday ahead of consultations to protest the nomination of Khatib.

The Presidency on Wednesday announced that the binding parliamentary consultations to name a PM-designate will be held on Monday.

Aoun refrained from calling for immediate consultations to name a replacement, arguing that prior consensus was needed on the shape of the new government amid the extraordinary situations in the country.

Hopefully the protest starts on Saturday when weather is better. No road blocks, maybe another human chain. Main assembly areas should organize events (by artists, students, experts, young, testimonies,... similar to the phoenix, at different times and transmitted to other plazas via giant monitors to link all demonstrators as one body. Of course, Gebran Tueni's pledge should echo as often as possible as this represents the true political and spiritual salvation of Lebanon.