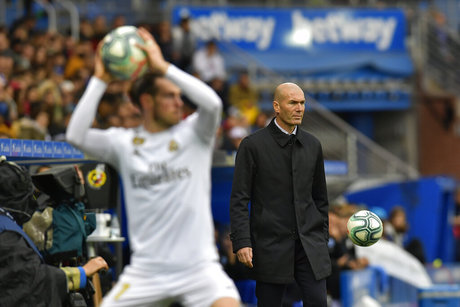 Zinedine Zidane confirmed on Friday that Gareth Bale has not trained ahead of Real Madrid's match against Espanyol as injury threatens to rule him out of this month's Clasico.

Bale is struggling with a minor problem in his thigh although the club remain optimistic he will recover in time for the crunch game against Barcelona at Camp Nou on December 18.

"He did it in the match against Alaves," said Zidane at a press conference before Saturday's La Liga match.

"We've had a few days off but he has felt some discomfort. He hasn't trained with us either today or this week."

Bale has only recently shaken off a calf injury that kept him out for just over a month between October and November, and his latest setback adds to a worrying list of fitness concerns for Zidane.

Eden Hazard could be sidelined for more than a month after suffering a fracture in his ankle while Marcelo might also miss the game against Barcelona, after he sustained a calf strain in training.

"Injuries are a nightmare. Eden isn't happy but it is what it is," said Zidane. "We hope his injury is a little less serious than expected.

"I don't know what we are going to do, I hope he will be back soon, Marcelo and Gareth the same. It is a major blow but we can't do anything about it.

"There are other players and that is what we have to focus on. We have to maintain our momentum in the game tomorrow."

Hazard had been getting closer to his exhilarating best in recent weeks, following a slow start at Madrid that was made more difficult by a thigh injury at the beginning of the season.

"He was playing very well, looked in great shape and showed his qualities as he has showed them before all over the world," Zidane said. "It's just a setback and I hope it won't last long."

Rodrygo and Isco could fill in up front either side of Karim Benzema while Ferland Mendy is likely to replace Marcelo at left-back.

Zidane was asked about Bale's personal habits, following reports the 30-year-old will be banned from playing golf by Wales during Euro 2020 next summer.

"I can only tell you about Real Madrid and I'm not going to impose rules on Gareth or any other player," Zidane said. "They're old enough to know what to do."

Real Madrid are second in La Liga, behind Barcelona only on goal difference. They have won six and drawn two of their last eight games in all competitions.