Qatar FM Talks of 'Some Progress' in Mending Gulf Rift 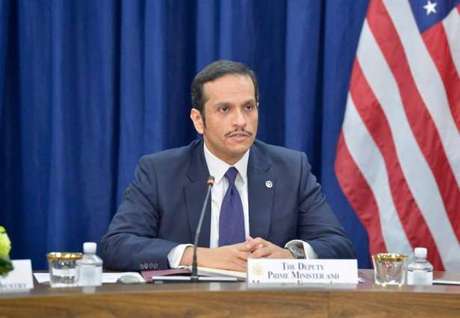 Qatar's foreign minister has spoken of "some progress" in talks with Saudi Arabia on ending a bitter two-year-old rift between Doha and the kingdom and its allies.

A Saudi-led bloc including the United Arab Emirates, Bahrain and Egypt cut all diplomatic and transport ties with Qatar in June 2017. They broke with Doha over allegations it backs radical Islamists and seeks closer ties with Saudi arch rival Iran.

In the latest sign of a thaw, Qatari Foreign Minister Mohammed bin Abdulrahman Al-Thani said Friday there had been "some progress" in talks with Saudi Arabia.

"We believe the blockade of Qatar and the sequences of events after that has been affecting and undermining the security in our region," the minister said in Rome at the Mediterranean Dialogue Forum.

"In recent weeks we have moved from a stalemate to some progress. There are some talks that have taken place between us and, specifically, Saudi," he said.

"We hope these talks will lead to a progress where we can see an end to the crisis."

The regional schism has seen families divided and increased costs for businessesb but despite the apparent thaw, a face-saving formula still needs to be devised to repair relations.

The disclosure of talks come shortly after Saudi King Salman invited Qatar's emir to a summit of the Gulf regional bloc in Riyadh on Tuesday.

Observers are eagerly awaiting Qatar's response, which could pave the way for a "reconciliation conference" despite the many hurdles that obstruct the path to detente.

"Signs that a reconciliation is impending are multiplying," Kristian Ulrichsen, a fellow at Rice University's Baker Institute in the United States, said after Riyadh's invitation to the Qatari ruler.

Some Saudi observers have downplayed the move, saying the king was following protocol and had invited the Qatari leader to last year's summit too.

The emir, Sheikh Tamim bin Hamad Al-Thani, spurned that invitation, sending a representative instead, as he had to other summits since the economic embargo was imposed in June 2017.

Signs of a thaw have multiplied despite Doha's refusal to heed the boycotting countries' demands that it close Al-Jazeera television, downgrade ties with Iran and close a Turkish military base in Qatar.

In a last-minute move last month, the three countries sent teams to a regional football tournament hosted by Qatar, leading to speculation of an imminent diplomatic breakthrough.

In a symbolic gesture, Bahrain's football association flew two plane-loads of supporters to see their semi-final win against Iraq on Thursday.

The Saudi team flew straight to Doha despite the ban on direct flights, although the UAE team still made the obligatory stop in a third country.

Bahrain will face Saudi Arabia in the final on Sunday.

Recent attacks on the kingdom's oil facilities and the blowback from Washington's combative stance towards Iran appear to have prompted Saudi Arabia and its allies to moderate their policies.