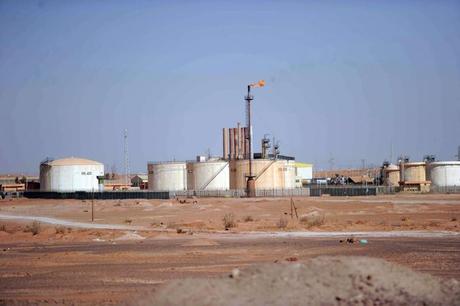 The North African country of Algeria, where a contentious presidential election is set for Thursday, has been the scene since February of massive demonstrations against a regime seen as corrupt.

Here are some key facts about the oil-dependent nation of 42 million people.

A French colony since 1830, Algeria became independent in 1962 after a bloody war which lasted nearly eight years.

In 1963, Ahmed Ben Bella, secretary general of the National Liberation Front (FLN) which had led the struggle against French rule, became the first president.

Two years later the FLN's Houari Boumediene overthrew and jailed Ben Bella, continuing to run Algeria as a one-party state until his death in 1978.

Colonel Chadli Bendjedid was then elected president, a post he held until 1992.

In 1988, protests rocked the capital Algiers, prompting the authorities to declare a state of emergency.

The army clamped down on demonstrators but introduced political reforms which brought an end to the single-party system.

However, when the country held its first multi-party legislative poll in 1991, the army stepped in to prevent the Islamic Salvation Front (FIS) winning and setting up an Islamic state.

That sparked a civil war which killed some 200,000 people between 1992 and 2002, with the Armed Islamic Group (GIA) claiming responsibility for many civilian massacres.

At the height of the war, FNL stalwart Abdelaziz Bouteflika won the 1999 presidential election.

He was backed by the army and launched a reconciliation programme that saw thousands of Islamist fighters lay down their arms.

He suffered a stroke in 2013 which confined him to a wheelchair, but despite his poor health was elected for a fourth term.

His bid for a fifth term in the April 2019 elections sparked massive street protests and saw him lose the support of key loyalists, including armed forces chief Ahmed Gaid Salah.

He finally submitted his resignation on April 2 but protesters continue to demand an overhaul of the entire political establishment.

Algeria is Africa's third biggest crude producer and among the 10 biggest producers of natural gas.

Those exports make up more than 95 percent of external revenue and contribute 60 percent of the state budget.

It currently produces around one million barrels of oil a day, according to official figures.

In late 2018, analysts at the International Crisis Group estimated that urgent reforms were needed to diversify the economy.

In November 2019, Algeria's parliament adopted a controversial law aimed at boosting investment in the oil and gas sector.

Algeria is Africa's biggest country and desert makes up more than five-sixths of its territory.

More than 80 percent of the population lives on the coast, including in the capital Algiers. Nearly 54 percent is younger than 30.

It counts some 10 million ethnic Berbers, most living in Kabylie, a mountainous region to the east of Algiers.

Although widely spoken, French is not one of Algeria's official languages -- which are Arabic and the Berbers' Tamazight.