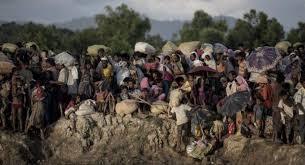 The Myanmar military launched a ferocious crackdown against its Rohingya Muslim population in 2017, driving around 740,000 into neighbouring Bangladesh.

On Tuesday the UN's top court, the International Court of Justice (ICJ), is hearing a case brought by Gambia accusing Myanmar of genocide against the Rohingya.

Civilian leader Aung San Suu Kyi is leading the delegation to The Hague to defend the military.

Here are key dates in the crisis:

The army retaliates with operations in Rohingya villages ostensibly to flush out insurgents.

It says it killed 400 rebels but opponents say most of the dead were civilians.

The United Nations says at least 1,000 people lost their lives in the first two weeks of the military operations.

By September 5 more than 120,000 Rohingya have fled into Bangladesh, overwhelming its ill-equipped refugee camps.

Many speak of abuses by the army and members of the Rakhine ethnic group, who are majority Buddhist.

There are already at least 200,000 Rohingya in Bangladesh from previous waves of violence.

In her first statement on the crisis, Myanmar's civilian leader Aung San Suu Kyi pledges on September 19 to hold rights violators to account but refuses to blame the army.

She says she is open to bringing some of the exiled Rohingya home pending a "verification process".

Bangladesh and Myanmar on November 23 agree to start repatriating refugees.

But the UN High Commissioner for Refugees says conditions are not in place for their safe return and the process halts.

On September 3, 2018 two Reuters journalists accused of breaching Myanmar's state secrets law while reporting on a Rohingya massacre are jailed for seven years.

They are eventually released on a presidential pardon after more than 500 days behind bars on May 7, 2019.

On August 25, 2018 tens of thousands of Rohingya refugees stage protests to mark the first anniversary of their exodus.

UN investigators call for the prosecution of Myanmar's army chief and five other top military commanders for genocide, crimes against humanity and war crimes.

On September 18, 2018 the Hague-based International Criminal Court (ICC) announces a preliminary probe into the Myanmar military's alleged crimes against the Rohingya.

In November an attempt to repatriate 2,260 Rohingya fails as they refuse to leave without guarantees for their safety.

On July 16, 2019 Washington announces sanctions against Myanmar's army chief and three other top officers for their role in "ethnic cleansing".

About 3,500 Rohingya refugees are cleared to return home but none turn up to take the buses and trucks provided to transport them on August 22.

On September 16 the UN says some 600,000 Rohingya remaining in Myanmar face a "serious risk of genocide".

On November 14, the ICC gives the green light for a full investigation into the persecution of the Rohingya.

The approval comes three days after West African nation Gambia files a landmark lawsuit at the UN's separate International Court of Justice accusing Myanmar of genocide for its treatment of the Rohingya.

In the same week, a third case is filed by rights groups under the principle of universal jurisdiction in Argentina.

On December 8, Nobel Laureate Suu Kyi, once lauded as an icon of democracy, travels to The Hague to lead Myanmar's defence at the ICJ during December 10-12 hearings.