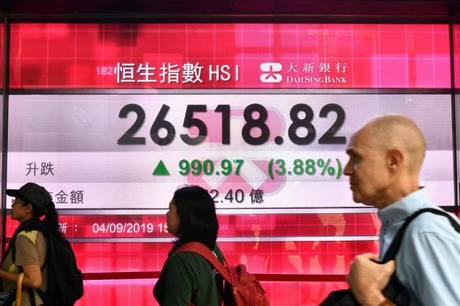 Asian markets mostly rose Wednesday but investors are growing nervous at the lack of news on China-US trade talks, with Washington yet to cancel tariffs on a swathe of Chinese goods planned for the weekend.

Negotiators are still trying to hammer out a mini agreement and the mood on trading floors remains upbeat, while most observers are confident the two sides will eventually reach a deal, which has fed a global equities rally for weeks.

However, a fresh round of levies on $160 billion of Chinese exports to the US is due to be imposed on December 15, and there has been no word from the White House on a possible delay to that date.

The removal of tariffs is a key demand of Beijing's in the talks.

And on Tuesday Donald Trump's top economics adviser Larry Kudlow warned that the measures remained in play for now.

"The reality is that those tariffs are still on the table," Kudlow said, although he did say that Donald Trump had struck a "constructive and optimistic tone" on China.

The uncertainty weighed on Wall Street, with all three main indexes edging down.

Hong Kong jumped 0.8 percent and Shanghai added 0.2 percent, while Sydney gained 0.7 percent. Seoul, Singapore, Taipei and Manila were also well in the green, with Mumbai starting on an upbeat note.

But Tokyo finished 0.1 percent lower, with Bangkok also down.

"The fact the two sides are negotiating is a positive sign, as it’s when both sides are locked in a stand-off without communication, then traders get nervous," said David Madden at CMC Markets UK.

On currency markets the pound tumbled against the dollar after a fresh poll predicted Prime Minister Boris Johnson's ruling Conservatives would win a much smaller majority than a previous projection.

The YouGov opinion poll said the Tories would win Thursday's vote, with a majority of 28 seats, sharply down from the 68 forecast in a similar study at the end of November.

Sterling has surged in recent weeks -- sitting at an eight-month high on the greenback and a two-and-a-half-year peak against the euro -- on expectations Johnson would win a big enough majority to push through his Brexit deal.

But the narrowing polls point to the possibility of another hung parliament, which would lead to more uncertainty in Westminster and drag out the Britain-EU saga even longer.

"The margins are extremely tight and small swings in a small number of seats, perhaps from tactical voting and a continuation of Labour’s recent upward trend, means we can't currently rule out a hung parliament," YouGov political research manager Chris Curtis said.

"One thing's for sure: when it comes to UK elections, and as history reminds us, it's never over till it's over," said AxiTrader's Stephen Innes.

The Federal Reserve's police decision later Wednesday is also in focus, with the central bank's plans for monetary policy next year being closely watched. Analysts widely expect the central bank to hold off making any moves on interest rates as it assesses the state of the US economy.