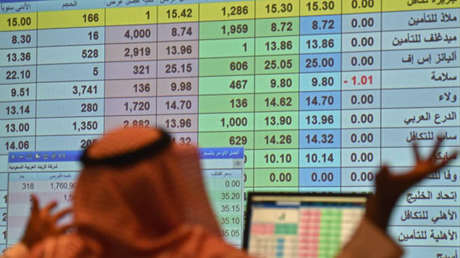 Energy giant Saudi Aramco's share price surged on Thursday, the day after its market debut, briefly raising the company's worth to a $2 trillion milestone before falling back.

Following the initial surge, the price fluctuated heavily but the company's valuation stayed below the $2 trillion mark which had been sought by the kingdom's de facto ruler, Crown Prince Mohammed bin Salman.

On its market debut on Wednesday after the world's biggest ever IPO, Aramco shares had also surged by the maximum permitted daily rise of 10 percent, raising the company's valuation to $1.88 trillion.

Trading on the Tadawul stock exchange closes at 1200 GMT.

You told us yesterday that 1.5% of the shares are publicly traded. The rest are in the hands of MBS and company. If a majority of the shared were traded publicly, the company would force democracy upon KSA: the light of day, market rationality, an end to its fairy-tale kingdom