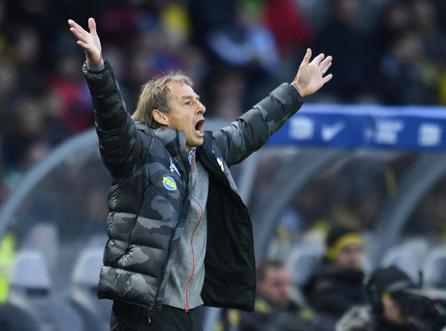 Jurgen Klinsmann, who has been tasked with keeping up Bundesliga strugglers Hertha Berlin, reminds midfielder Marko Grujic, on loan from Liverpool, of Reds manager Jurgen Klopp, who extended his contract Friday.

Klopp, 52, has just penned a new deal until 2024 with Liverpool, who are eight points clear in the English League, and Grujic says Hertha's new boss Klinsmann has the same style as the Reds' charismatic manager.

"He reminds me of Jurgen Klopp. His speeches are amazing. He is very calm, yet has a certain charisma, like Klopp," Grujic, 23, who has been loaned to Hertha until the end of the season, told German daily Bild.

"Both need only a few words and as a player, you want to go straight onto the pitch and prove to everyone what you can do."

They are home to fifth placed Freiburg on Saturday and Grujic says Klinsmann has got the Hertha team fired up.

"It is an honor to train under him," said the Serbian international.

"He is one of the biggest names in German football."

Nevertheless, Klinsmann has his work cut out with Hertha battling a third relegation from Germany's top flight in the last decade.

"The team has understood that we are in a relegation battle and that it is a precarious situation," said Klinsmann earlier in the week.

The 55-year-old says his priority "is to get as many points as possible by Christmas. We urgently need three points" against Freiburg, with tough games against Leverkusen and league leaders Moenchengladbach still to come in 2019.

Klopp is on course to bring the English league title to Merseyside for the first time in 30 years and Klinsmann admits being a fan of the ex-Dortmund coach.

"If he wins the title, they will give him a knighthood and one day call him 'Sir Jurgen Klopp'," joked Klinsmann.

"I am a great admirer of 'Kloppo'- I don't think anyone in Liverpool will want to see him go."