Israel Constructs Fence around Ghajar, Talk of its Withdrawal Come to an End 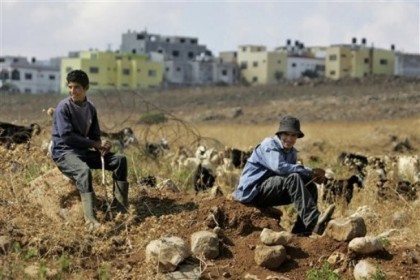 Israeli troops began constructing a barbed wire fence around the southern village of Ghajar on Thursday.

A high-ranking United Nations Interim Force officer inspected the site, while a source from the international force told the Central News Agency that the issue of Ghajar is very difficult and complicated, adding that it needs time to be resolved.

Meanwhile a security source in the South told the agency: “Israeli talk of a withdrawal from the northern section of Ghajar has come to an end as indicated by the Israeli troops’ construction the fence.”

The Israeli government had agreed on November 17, 2010, to withdraw its troops from the northern section of Ghajar and hand over control to UNIFIL, a measure that the residents of the village oppose, according to experts.

Nearly 2200 residents live in Ghajar, all of whom have been granted Israeli citizenship in 1981.

They will be stripped of this citizenship and all the benefits that come with it if the village is returned to Lebanon.

Ghajar was occupied in 1967 when Israel occupied the Syrian Golan Heights.