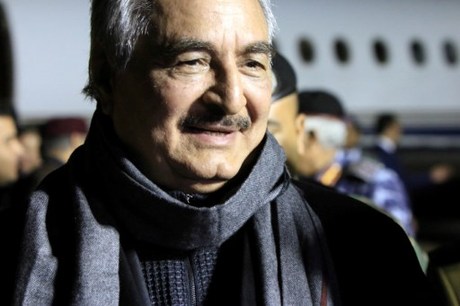 Russian Foreign Minister Sergei Lavrov said Monday's talks on a ceasefire deal between the warring sides in Libya had made some progress, but strongman Khalifa Haftar asked for more time to study the document.

Haftar's forces based in eastern Libya have been battling since April to take Tripoli from the U.N-recognized government in the capital.

The Moscow talks followed a joint call by Turkish President Recep Tayyip Erdogan and President Vladimir Putin for a ceasefire in the North African state.

"There has been certain progress" after talks in Moscow with Russia and Turkey lasting some seven hours, Lavrov told journalists in a short statement.

He said the head of Libya's U.N.-recognized Government of National Accord (GNA) Fayez al-Sarraj and head of High Council of State in Tripoli, Khaled al-Mechri "have just signed" the ceasefire agreement.

But Haftar and Aguila Saleh, a Haftar ally, "have asked for a bit more time until morning to make a decision on its signing," Lavrov said, though claiming they also "view the document positively."

The oil-rich country has been wracked by turmoil since a 2011 NATO-backed uprising killed long-time dictator Moammar Gadhafi, with multiple foreign powers now involved in the diplomacy.

Ankara and Moscow have established themselves as key players in Libya.

The ceasefire document spells out the terms of a truce which took effect over the weekend.

Turkish Foreign Minister Mevlut Cavusoglu said once the document is signed by Haftar, both sides "would take the responsibility" for a ceasefire launching a political process in the country.