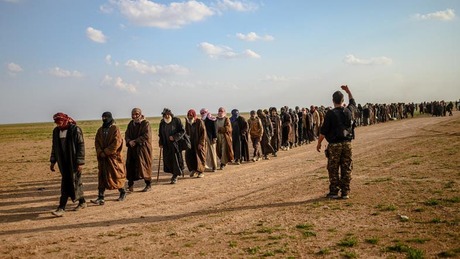 A Frenchman has been sentenced to 22 years in prison for seeking to recruit dozens of youths to fight as jihadists in Syria and for leading a brigade of French-speaking Islamists in the war-torn country.

Mourad Fares, 35, fled Syria in 2014, and was arrested in Turkey and handed over to French authorities the same year.

Prosecutors said he played a "crucial" role in the recruiting of young people to fight as jihadists in Syria, and noted a lack of any "real regret" for his actions.

Fares appeared unmoved as the verdict was read out at a special court Friday evening.

He admitted to the court he "indirectly" recruited youths to fight as jihadists via his propaganda videos and "facilitated" the entry of a number of people into Syria.

He denied taking part in combat operations in Syria, where he travelled in 2014.

But prosecutors said he "participated in armed actions" with the Islamic State in Iraq and the Levant (ISIL), later known as the Islamic State group, before leaving to a join a cell of French-speaking jihadists affiliated with the Al-Nusra front.

The court also found Fares guilty of leading this cell.

France has been on high alert since a wave of jihadist attacks that began in 2015 which have killed more than 250 people.

Dozens of French citizens left to join IS in Syria and Iraq before US-led coalition forces dislodged the insurgents from their so-called "caliphate" last year.

IS leaders also urged followers in France to stage attacks on their own, often targeting security forces, and officials have said the threat of further IS-inspired attacks remains high.