Clashes Erupt as Protesters in Beirut Mark 100 Days of Demos 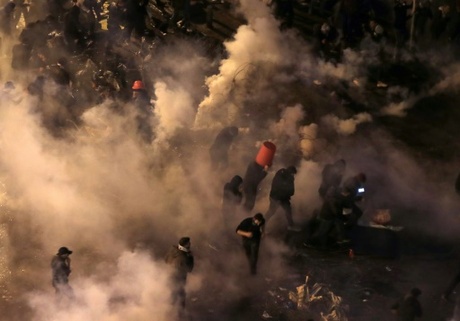 Clashes erupted Saturday between protesters and security forces in central Beirut, as hundreds of people hit the streets to mark 100 days of anti-government demonstrations and denounce a new cabinet line-up.

Protests demanding the removal of politicians deemed incompetent and corrupt have gripped Lebanon since October 17 and forced the resignation of the government.

A new cabinet was announced on Tuesday after a three-month vacuum, but protesters, who have been demanding a government of independents, say its members were chosen along sectarian lines.

On Saturday, several marches were held in Beirut under the slogan "No trust", with protesters converging on the city center chanting "Revolution, Revolution" under the watchful gaze of security forces, who were deployed in high numbers.

At Riad al-Solh Square in central Beirut, the crowd gathered near the Grand Serail -- the seat of the government and residence of the new Prime Minister Hassan Diab.

Protesters tore down metal fences and barbed wire as well as tried to move concrete blocks that had been erected by the authorities as barricades, an AFP correspondent at the scene said.

The demonstrators also threw rocks and firecrackers at the anti-riot police on the other side, who responded with water cannon and tear gas.

The Lebanese Red Cross said 20 people were wounded, including two who were rushed to hospital while the others were treated on site. The injured were from both sides, the organization said.

Bearing shields and in tight ranks, the security forces dispersed the crowd, but only after protesters had dismantled almost all the obstacles erected to block the way to the government building, said an AFP correspondent.

The protest movement has largely been peaceful since it began more than three months ago, but has turned violent in the past two weeks, leaving hundreds wounded and dozens arrested.

The new prime minister has vowed to meet the demands of protesters, who have been calling for a complete overhaul of the political system and remain unconvinced that their voices have been heard.

"The government (formed on Tuesday) is not the one we have been seeking," demonstrator Perla Maalouli said in central Beirut.

"We demand a salvation government... not one whose members are selected according to (sectarian) quotas," which the protest movement had mobilized against, she said.

Apportioning positions between Lebanon's main Christian, Sunni and Shiite communities has been key to forming governments since the end of the 1975-1990 civil war.

Maalouli said politicians had failed to heed the protest campaign.

"After 100 days (of demonstrations), they continue to do as they please, as if the people have not spoken," she said.

Lebanon has one of the world's highest debt-to-GDP ratios and economists have argued it is hard to see how the near-bankrupt country could repay its creditors.

The Lebanese pound has lost over a third of its value against the dollar in the parallel market and banks are tightening restrictions on dollar transactions amid a liquidity crunch.

The economic downturn has raised questions over whether Lebanon will turn to the International Monetary Fund for a bailout -- which some officials regard as inevitable.

On Saturday, the new Finance Minister Ghazi Wazni met with a senior IMF official in Beirut, a day after holding talks with a World Bank delegation.

Diab on Wednesday warned that Lebanon faces an economic "catastrophe".