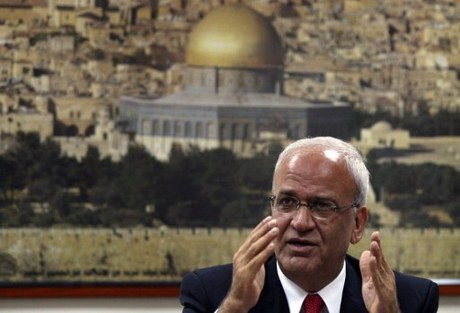 Chief Palestinian negotiator Saeb Erekat told AFP that the Palestine Liberation Organization reserved the right "to withdraw from the interim agreement" if Trump unveils his plan.

Sometimes called Oslo II, the interim agreement set out the scope of Palestinian autonomy in the West Bank and Gaza.

The interim pact was only supposed to last five years while a permanent agreement was finalized but it has tacitly been rolled over for more than two decades.

Erekat's comment came as Israeli Prime Minister Benjamin Netanyahu was headed to Washington, where Trump was expected to release the plan before Tuesday.

The Palestinian leadership was not invited and has already rejected Trump's initiative amid tense relations with the U.S. president over his recognition of Jerusalem as Israel's undivided capital.

The Palestinians see east Jerusalem as the capital of their future state and believe Trump's plan buries the two-state solution that has been for decades the cornerstone of international Middle East diplomacy.

World powers have long agreed that Jerusalem's fate should be settled through negotiations between Israel and the Palestinians.

Ok so you quit, and so what? The Arabs and the Palestinians themselves sold out to Israel. And ONLY Hezbollah wants to liberate Palestine. What a bunch of losers... Come Tuesday Palestine will be erased from the worlds maps and no longer exist...

Canada has announced that it has suspended talks with the United States of America about becoming the fifty-first US state. Trump had reportedly been dragging his feet on the talks, raising the question of how the fifty-first star would be added to the national flag. Canada's proposal has been alleged in the press to add its star to the area of red and white stripes, to emphasize that it is not just a wannabe but rather a coequal partner in US culture, politics, and economics.
"Canada aspires to US economics, English politics, and French culture, but instead achieves US politics, English culture, and French economics." A Canadian told me that. I don't think a Canadian would endorse ethnic cleansing in Palestine.

Lol @ canadianzib. He is blaming the arabs for the Palestinian misery, while he as an arab is defending israel.

This is not news Palestinian leadership is non existant to say the least. Plus the world has moved on Iran lies and claims they want to liberate Palestine while their terror program is purely about spreading their faith in the region...

Abbas has threatened to reveal how much money he has been paid to betray Palestinians.